A version of this was published in The Santa Fe New Mexican
April 5, 2013

Back in the mid-’60s, when I was but a lad, my mom, knowing how much I liked Johnny Cash, gave me an unusual album. It was called Bitter Tears: Ballads of the American Indian.

Unlike the other Cash records I had, there were no big radio hits on this one. It had to be one of the angriest county albums released on a major label in the ’60s — or, come to think of it, ever. The songs were all about broken promises, broken lives, damned rivers, and damned peoples.

And yet, there was some wicked humor in at least one song, a “tribute” to a certain notorious Indian fighter: “I can tell you, buster, I ain’t a fan of Custer/And the general he don’t ride well any more.” Like most the songs on the album, “Custer” was written by Peter La Farge, son of the late Santa Fe writer Oliver La Farge. 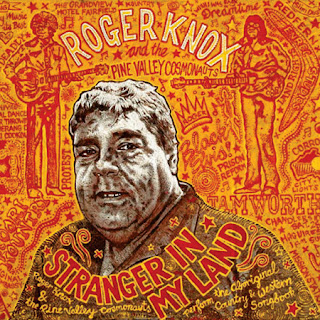 There’s a recently released CD that deals with the plight of indigenous people, and it’s not about American Indians: Stranger in My Land by Aborigine singer Roger Knox (backed by Chicago’s Pine Valley Cosmonauts). The stories told take place in different locales than those on Bitter Tears, but many of the themes are similar.

Knox has been performing and recording in the land down under for more than 30 years. This collaboration with the Cosmonauts, a loose-knit country-rock collective headed by Jon Langford (best known for his work in The Mekons and The Waco Brothers) is his American debut.

The teaming was instigated by Langford, who first read about Knox in a book by Australian author Clinton Walker called Buried Country, which chronicles Aboriginal country musicians. In a recent Chicago Tribune interview, Langford said that the book “really struck a chord in me, that black people in Australia would use basically a white American music form as a way of telling their stories.”

For this album Langford gathered an impressive bevy of guests including fellow Mekon Sally Timms, R & B codger Andre Williams, and American country giant Charlie Louvin (who died since he contributed his vocals to the song “Ticket to Nowhere”). Kelly Hogan, Will Oldham, and Tawny Newsome added some vocals, and The Sadies, a Canadian band that has collaborated with Langford before, became honorary Cosmonauts.

There are several sentimental wish-I-was-back-home tunes here, a familiar theme in American country music. There is “Home in the Valley” (with sweet harmonies by Timms) and “Blue Gums Calling Me Back Home,” in which Knox gets nostalgic about “a land where the kangaroos and emus roam.”

In “The Land Where the Crow Flies Backwards,” Dave Alvin and Knox’s son Buddy swap electric-guitar leads as Knox tells about a previous career herding cattle and admits to the harsh brutalities of the cowboy’s life: “The mosquitoes and flies torment you, and the sun beatin’ down so hard/You might think it’s a hell of a place, but to me, it’s my own back yard.” In “Streets of Tamworth,” he longs for “didgeridoos droning in the night,” “the taste of porcupine,” and being where “the white man’s ways won’t bother me no more.”

There are also some scathing political songs. “Warrior in Chains” is about an Aborigine inmate who commits suicide in an Australian prison. (Knox, as well as many of the songwriters whose works are on this album, spent some time within the Australian corrections system.) “Brisbane Blacks” deals with alcoholism among the Aborigines. “Wayward Dreams” is about the destruction of tribal customs because they don’t fit into the white man’s “wayward scheming dreams.”

And most heart-wrenching of all is “Took the Children Away,” written by Archie Roach. This is about the cruel Australian policy of taking Aborigine children from their homes in an attempt to assimilate them into the white culture. The policy officially ended around 1970.

My favorite song is “Scobie’s Dream,” a lighthearted tune about a drunk with severe d.t.’s. Poor Scobie hallucinates about an animal hoedown — “dancin’ kangaroos,” “two black crows playing the old banjo,” “Mr. Bandicoot in a gabardine suit dancing with a little brown pig,” etc. — for a whole week. The song, written by Dougie Young, is described in the liner notes as about “a jailbird and a drunk.” It exemplifies country music’s proud tradition of finding weird humor in even the most tragic situations. 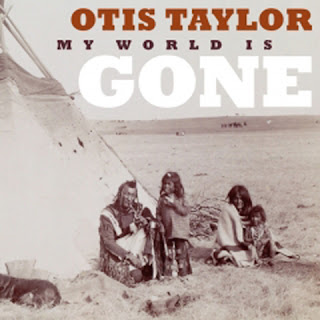 * My World Is Gone by Otis Taylor. Many of the best songs on My World Is Gone, like the material on Roger Knox’s album, deal with the plight of tribal people — in Taylor’s case, American Indians. The Denver bluesman is aided by Mato Nanji of Indigenous, a Native blues-rock band, on about half the tracks.

The most memorable “Indian songs” here are the title cut, a slow lament featuring Nanji’s guitar and fiddle by Anne Harris; “Sand Creek Massacre Mourning,” which deals with a 1864 attack by the Colorado militia (and a company of New Mexico volunteers) on Cheyenne and Arapaho villages in which mostly women and children were slaughtered; “The Wind Comes In,” featuring some tasty interplay between Nanji’s guitar, Brian Juan’s electric organ, and Taylor’s banjo; and the quick-paced “Lost My Horse,” a re-recording of a song that first appeared on Taylor’s 2001 album White African.

As usual, Taylor’s lyrics are sparse, repetitive, and short on detail. The words provide a loose framework, and he lets the instruments create the mood. Sometimes only Taylor seems to know what the song is actually about.

For instance, I had no idea what “Girl Friend’s House” was about until I read the liner notes: “After catching his wife in bed with her girlfriend, the husband decides he wants to join in.” I listened to the song a couple of more times to try and catch some juicy details, but alas, I could find none.