A version of this was published in The Santa Fe New Mexican
April 19, 2013


Vanishing Point is an early-1970s movie about a former cop named Kowalski who picks up a Dodge Challenger in Denver to deliver to San Francisco. He makes a bet in a Denver biker bar that he can drop off the car by the next afternoon. Eluding cops, running them off the road, and crashing through roadblocks in several western states, Kowalski is cheered on by Super Soul, a blind disc jockey at some Podunk radio station who calls him “the last American hero” and “the last beautiful free soul on this planet.”

Vanishing Point also is the name of the latest album by Mudhoney, a band that’s been speeding along the metaphorical highway of rock ’n’ roll for a quarter century. 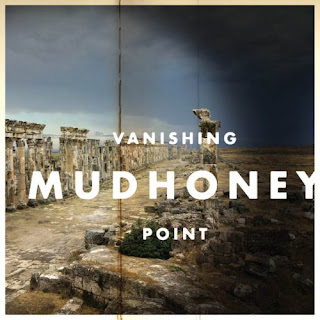 Heck, the band is named after a Russ Meyer boobsploitation film that played at the same drive-ins that Vanishing Point would a few years later.

Sometimes I feel like the outcast voice in the wilderness Super Soul, rooting for this perpetual underdog band. Fortunately, the new album gives me a lot to cheer for.

Somewhere in a parallel world, some A & R lackey played his boss, music mogul David Geffen, a weird little single by a Seattle band on an independent label nobody every heard of. Fireworks went off in Geffen’s head.

Geffen knew he’d heard an anthem for the new generation. He would sign this band, commission a cool video with punk-rock cheerleaders for that song, “Touch Me I’m Sick,” and Mudhoney would launch a revolution that would shake American culture.

OK, back to reality: actually, something similar happened to Nirvana, another Seattle band on the Sub Pop label. In the wake of its success, major labels would scoop up dozens of Seattle bands, including Mudhoney.

In the early ’90s, Mudhoney was considered, at least by casual fans who didn’t know much about its history, to be kind of like Nirvana’s little brothers. (In fact the one time I saw Nirvana, Mudhoney was the opening act.)

Sometimes I wish it would have been Mudhoney instead of Nirvana to carry the banner back in the days when the flannel flew. I’d argue that Steve Turner is a better guitarist than Kurt Cobain was. Mark Arm’s lyrics have lots more humor than those of Cobain. Musically, Mudhoney drew far more from garage, psychedelic rock, and The Stooges than Nirvana did.

But after Nirvana imploded, most of the “new Nirvanas” fell by the wayside, broke up, died of heroin overdoses,went back to the proverbial car wash — whatever, never mind.

Except Mudhoney. Of all those crazy Sub Pop groups of the late ’80s and early ’90s, Mudhoney is the last band standing. 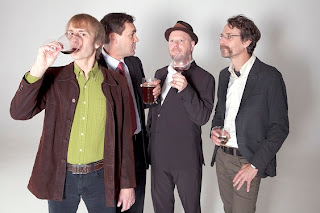 One could argue that Soundgarden might also qualify for that honor. Like Mudhoney, it started out in the ’80s on Sub Pop and just last year released a good album — King Animal. However, Soundgarden broke up for more than a decade. It didn’t soldier on like Mudhoney, releasing new albums on a fairly regular basis.

I did say “fairly” regular, right? Vanishing Point comes five years after the band’s previous album, The Lucky Ones. But even if Mudhoney isn’t as productive as it was in days of yore, it still packs a punch.

The first song, “Slipping Away,” kicks off with a short but snazzy drum solo by Dan Peters (the Gene Krupa of grunge?). The song slows down suddenly as Turner’s rubbery guitar creates a psychedelic sonic assault that would make the Butthole Surfers cry uncle.

This is followed by “I Like It Small,” which is about — wait, is this about what I think it’s about? “Chardonnay” is a minute and 39 seconds of raw punk rock with Arm spitting out a rant against the “critics’ favorite” wine with the same venom most rockers would save for a cheating girlfriend, a bad boss, or the government.

And he gets even more grouchy on “I Don’t Remember You,” a tale about an encounter at a supermarket with a forgotten acquaintance. Arm sings, “It’s a goddamn pleasure to meet you again/Half my brain is missing, and I don’t need new friends/I can’t keep up with the good friends I’ve got/’Scuse me while I fill this shopping cart.”

And I don’t know who or what is the target of “Douchebags on Parade,” which has subtle overtones suggesting Quadrophenia-era The Who.

At the moment — and this has changed at least a couple of times since I got the album — my top tune from Vanishing Point is “The Final Course.” It’s a strange tale that involves a decadent feast, accusations about the paternity of a child, the choking of a “shrew,” murder, and cannibalism (which repulses the narrator, though apparently not as much as Chardonnay does the narrator in that other song.)

The lyrics suggest a medieval setting, though when Arm sings “Someone brained me with a skillet, boom boom, out go the lights” it takes on overtones of the Stooges — not Iggy, but Moe, Larry, and Curly.

So Mudhoney keeps barreling on like Kowalski speeding down some Utah highway. There’s not much chance at this point that Mudhoney’s career will end, symbolically speaking, in some glorious, fiery crash like Kowalski did on the screen.

Fans are just happy that they haven’t run out of gas yet.

Blog Bonus: Bring on the videos.

A classic from the golden years of Grunge

And here's a look at the movie that gave the band their name.