Due to a last minute space crunch, this column won't be appearing in the print edition of Pasatiempo this week. However, it's supposed to appear on the website. And obviously, it's already on this blog.

Santa Fe’s Joe West proved many years ago that he could make excellent albums full of funny and provocative — not to mention catchy — country-flavored songs. And he’s still perfectly capable of writing and singing fine, slightly cockeyed country tunes. But judging from his output in recent years, at some point West got restless. He needed to stretch.

There was the 2010 rock opera, Time-Traveling Transvestite (credited to Xoë Fitzgerald, the hero of that story), on which West and his band branched out into 1970s glam rock and a little old-school garage band sounds. This was followed by Aberdeen, S.D., a loving ode to the town where West spent his high-school years. This album’s even more experimental than Xoë's album — with lots of spoken-word pieces, field recordings of train whistles and old friends, sinister tape loops over moody instrumental pieces — and some straightforward West songs.

Now comes Blood Red Velvet, a rich collection, which, if not quite as experimental as Aberdeen, still shows West progressing.

With his band, The Santa Fe Revue (not to be confused with The Santa Fe All Stars, another West ensemble), West performs some dandy new songs in the country/folk vein.

These include the opener “It’s All Over,” a song about a break-up; a minor-key love ballad called “Tara’s Song” (he sings, “People say, Joe, what in the world are you doin’/A chick like that will lead you down the road to ruin./That ain’t no chick, mister, that’s my wife/I never felt so alive in all my life.”); the banjo-driven“Don’t Let ’Em Get You Down”; the title song, which has one of the prettiest melodies West has ever written; and “Hometown Shit Beer,” a sudsy ode to cheap local brews.

But West doesn’t keep it all country. “The Blues” is an anthem-rocker with a full-blown horn section. “Pink Nun,” which features some beautiful background vocals by Santa Fe’s Felecia Ford — and someone who sounds like a male opera singer and what sounds like samples of Spanish-language radio in the background.

West does a little recycling here. The album has a couple of new and improved versions of Xoë Fitzgerald songs, including a trip-hoppy “Frank’s Time Travel Experiment” (sounding even more alien than the original) and “I Got It All,” featuring the brassy, bluesy vocals of band member Lori Ottino.

And then there’s “The Glory Days of Doña Dillenschneider,” which originally appeared on the first episode of West’s defunct (or, hopefully, only dormant) KSFR-FM radio show, Intergalactic Honky Tonk Machine. This features a violent little anecdote told by Dillenschneider, a friend of West’s (and 1967’s Miss Rodeo de Santa Fe). The track ends with her take on the old Mary Hopkins hit “Those Were the Days.”

Blood Red Velvet ends with a look at mortality. It’s a cover of the late Warren Zevon’s “Don’t Let Us Get Sick,” with band member Margaret Burke on lead vocals, accompanied by West’s young daughter Clementine.

But that’s not the only look at morality on the album. Among the tracks is “Death in Santa Fe.” It’s less than two minutes long, and it turns out to be a dumb joke. But it’s the little touches like this that give West’s work its flavor. 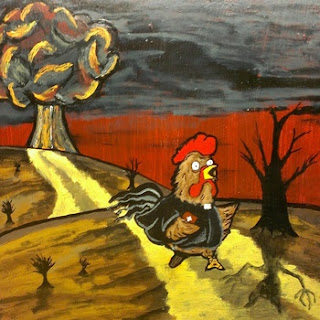 * Cluckaphony by The Imperial Rooster. Here’s another rough, rowdy, raucous, and sometimes a little raunchy romp by Española’s number one gonzo country band.

This is the group’s third studio album (there’s also some live stuff they give away online).

And while the group retains plenty of its punk/slop spirit that made us Rooster fans in the first place, I do believe the musicians sound tighter than ever before. You can really tell on breakneck songs like “Overunderstimulated” and “Santa Cruz.” They still sound like they’re having a party when they play, but musically, they’re getting stronger.

You’re not going to mistake them for The Beach Boys, but the vocal component is one of the strong points of this collection. At least four of the six members sing. The choruses on lots of the songs here feature boisterous vocals, sometimes harmonies, sometimes unison, and sometimes with a Rooster or two singing in falsetto. It sounds as if everyone in the bar is singing along with the band, and indeed it makes the listener want to sing along as well.

But the main attraction for The Imperial Rooster always has been the group’s hilarious songs. There’s no shortage of those on Cluckaphony. There’s an encounter with Satan in “The Hoover Farm Exorcism,” drugs and debauchery on “April,” and irreverent look at death on “Pine Box Blues.” And “Polka de Nalgas,” a song any man could get behind. 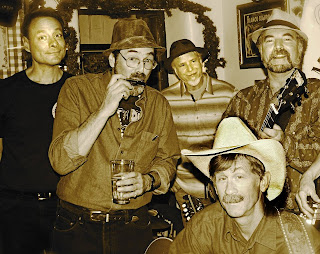 * A Minor Bit Blue by Country Blues Revue. This is the second album of easy-going, unpretentious music by a Santa Fe band fronted by singer and guitarist Marc Malin and “Harmonica” Mike Handler (I forget what he plays). The rhythm section for most of the tunes are bassist Larry Diaz and drummer Arne Bey.

A host of local musicians make cameos here, as does one out-of-towner, singer Roberta Donnay, who probably is best known for being one of Dan Hicks’ Lickettes in recent years. She takes turns with Malin singing lead on “Comfort,” a breezy little song that sounds like something Hicks himself might record.

Despite the name, CBR doesn’t limit itself to country blues. In fact, several songs feature horns. The musicians take a stab at rockabilly on the original song “Rockability” and a cover of “That’s Alright Mama.” Some tunes like “No More Bad News” (featuring call-and-response vocals between Malin and Stephanie Hatfield) hint at New Orleans funk.

My favorite songs on this album include the good-time cover of The Band’s “Ophelia” and the swampy “Voodoo Queen” featuring Handler growling the vocals and Terry Diers on accordion. But CBR saved its best for last, another one rooted in the swamp called “The Blues Chose Me.”

The Imperial Rooster singing a song from Cluckaphony