UPDATE April 23, 2013: Charges against Curtis have been dropped shortly after he was released from custody. More details HERE. 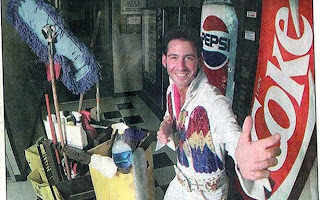 The Mississippi man arrested yesterday on suspicion of sending ricin-laced letters to President Obama and U.S. Sen. Roger Wicker has been described in national news reports as an "Elvis impersonator."

That's true. But Kevin Curtis also is an aspiring country singer and songwrtiter. You can hear some of his original tunes on his ReverbNation page. These aren't the kind of songs I normally play on The Santa Fe Opry, but they're probably as good than most the stuff on commercial country stations.

I also found this on Curtis' Facebook page. I can't say for certain it's him, but it's one of the most bizarre tributes to former Santa Fe resident Randy Travis I've ever seen.