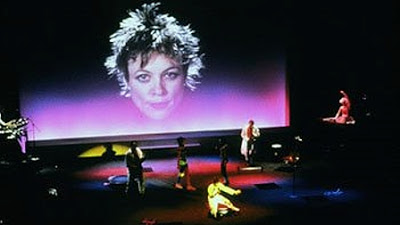 Mr. Heartbreak still is the best album of the 1980s in my book.

Home of the Brave still is one of my favorite concert films of all time.

She is far too good for Lou Reed.

I met her once, at a Shalako ceremony at Zuni Pueblo in the mid 1980s. It was about 3 in the morning and all I could think of to say was "I'm one of your biggest fans." She didn't seem impressed.

Later that morning I saw her in a Shalako house. She as sitting down and one of the Mudheads running around nearly tripped over her.

A few months later I saw Home of the Brave at the old Jean Cocteau theater. Tell me her musicians in the clip below don't look like Mudheads. (Though I think the concert was actually shot before I saw her at Zuni.)

Play this full screen and turn it up: