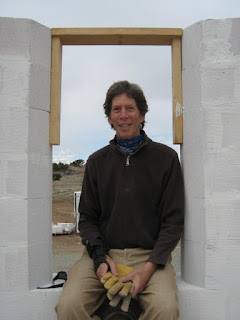 I just learned of the death of KSFR's Diego Mulligan a few minutes ago.

He was a major player in the effort to save KSFR back in the late '90s, when the administration of Santa Fe Community College was trying to get rid of the station. Thanks to those efforts, KSFR emerged as and remains a strong independent station.

Here's a statement from KSFR Board Chair Marilyn Mason:

It is with deep sadness we report the death of KSFR's Diego Mulligan.  He will be remembered not only as the inspiring host of the Journey Home show, but as an avid environmentalist. His daily program provided the platform for educating a generation of Santa Feans about climate issues and the human condition.
Diego suffered from multiple health problems over the past several years, and we had all pulled for him to recover fully.  His passing is a shock.
I know you'll join me in sending deepest sympathies to his wife Jennifer and children.


Below is Diego's biography, which he wrote for KSFR's website:


Diego Mulligan is the anchor for Santa Fe's longest running daily radio talk show–The Journey Home, on KSFR 101.1 FM, Santa Fe Public Radio, and is an independent alternative all about People, Planet and Politics. The daily show airs live every weekday (M–F) from 5:06 to 6:00 PM MT covering the Rio Grande Valley from Albuquerque to Taos, New Mexico, USA. Diego interviews a remarkable range of local-to-global experts on the nitty-gritty of cultural transformation on our journey home to a more livable world. With youthful curiosity and edgy humor he and his world-class guests explore practical solutions aimed at sustaining person and planet, while enjoying the journey along the way.

Diego is best described as an avid explorer of new options and the innovative power of people. As an aspiring generalist, he understands whole systems and draws attention to the connections that bring us together. His gift as a cultural interpreter is to help people grasp the changes and challenges facing us, and how individuals, families, businesses and communities can navigate their course to a more positive and sustainable future.

Born in Miami, Florida in 1950, Diego Mulligan grew up in the Bahama Islands as an American expatriate. He was the first American boy to live fulltime on Grand Bahama, where he was part of a multi-cultural working class and professional community of pioneers, resort developers, underwater divers and seafarers. Diego was seduced by the stunning diversity of Grand Bahamas’s coral reefs and tropical forests, where he learned to SCUBA dive and build thatched huts and tree houses at an early age. As a youth member of the International Underwater Explores Society, he carried diving gear for such notables as Jacques Cousteau, Lloyd Bridges and Walter Cronkite. He has been committed to environmental restoration ever since.

In 1968 Diego began his first career in radio. After dropping out of college ("It seemed irrelevant and not challenging") he gained a coveted First Class Radio-Telephone Engineering license from the Federal Communications Commission and began hosting top-rated music shows in medium and major markets from Virginia's Shenandoah Valley to Miami's Gold Coast. He was one of the first DJs to develop the Album Oriented Rock format as an alternative to Top 40 in the late 60s, and went on to develop the now-popular Modern Country Crossover format before leaving commercial radio and TV in 1973. During this period he was also an exhibition sport parachutist (Skydiver) making over 200 freefalls and experiencing a wide variety of interesting situations.

Having protested the draft during the sixties, Diego was one of the first to join the all-volunteer military in 1973. After completing U.S. Army Aviation College with top honors he became an FAA-licensed and fully rated Air Traffic Controller (ATC) serving at one of Europe's busiest airports. Here he earned the nickname 'Emergency Mulligan', due to a coincidentally high number of pilots declaring emergencies during his shift. Though not one of them was his doing, Diego became an expert at dealing with various emergencies and crashes, such as talking down lost pilots in bad weather, and organizing search & rescue missions for downed aircraft from heavy-lift CH-47s to U-2 spy planes. After a near-death experience himself, Diego changed direction and eventually left ATC.

In 1976 entered the emerging field of Sustainable Community Development. After doing several internships, he was invited to join NGO projects in Europe and Africa, among them British-based Green Deserts (1978) where he served as communications director. He then went on to co-found the Tunisian Institute of Appropriate Technology (1980), and create the Community Economic & Ecological Development Institute (1988) and Center for Sustainable Community in Santa Fe (1990), and was co-founder of the Commons on the Alameda, the American Southwest's first successful CoHousing Community (1992). During this 20-year period he spent 12 years working abroad where he studied traditional architecture and village design. He also did extensive field-work in arid land restoration and reforestation, technology assessment and transfer with UNESCO, group governance and consensus building (Findhorn Foundation, Scotland), community economic development (Suffolk, England), and resident directed housing, environmental education, and renewable energy systems both in the nonprofit and private sectors (Santa Fe). As a consultant, he provided professional services for Aldea de Santa Fe (now completed), and Oshara Village (a 462 acre "sustainable transition town" now under construction in Santa Fe County).

He returned to commercial radio in 1993 with the Connections Radio Journal – a daily afternoon drivetime show – and shifted to Public Radio in 1997 as host of the popular daily talk and interview show, The Journey Home on KSFR 101.1 FM, Santa Fe Public Radio. In 2005 he co-founded the New Village Institute, and as the executive director, he consults with nonprofit groups, public institutions and real estate developers on the practical issues of creating a sustainable neighborhoods, community and culture, from resident directed sub-division design to renewable energy and conservation systems.

Politically Diego is fiercely independent. After starting as campus president of Young Republicans and (Young Americans for Freedom)  in college, Diego composted his rose-colored Republican credentials after interviewing Ronald Reagan up close in an elevator one day. Since then he has participated with the Libertarian, Green and Democratic parties, and considers himself a progressive who embraces the best of liberal and conservative approaches to public policy, but has little interest in the ideologies of Left & Right politics.

Diego is married to Jennifer Hanan who co-produces The Journey Home Radio Show. He has three children, Mikhaila (27), Joss (20) and Jaden (2). With invaluable support from Jennifer, Diego is living his dream to advance the field of sustainable living, while sharing the process with a growing community of radio listeners, while learning to – above all – enjoy the journey.

In 2004 Diego began designing the Oshara Synergy House and began building in September 2009. The idea was to combine deep green building design with a whole systems approach to renewable energy, water harvesting, food growing and home-based cottage industries. Together with Jennifer's input and commitment they decided to go all in, and construct this owner-built family home to include studios for producing The Journey Home Radio Show and other creative content, plus provide space for gatherings, live music, a country kitchen and gardens, and a village innovation workshop as an integrated center demonstrating sustainable living systems.

Two-thirds of the way into the project, in September 2011, Diego suffered a spinal cord injury that required life-saving surgery. This began a health and healing crisis that also caused a debilitating heart arrhythmia that required a pacemaker implant. Then in September 2012 it was discovered that Diego had contracted a fairly rare blood cancer. The disease – though life-threatening – can be slowed with chemotherapy and managed with stem-cell transplant technology scheduled for early 2013.
at June 22, 2013