TERRELL'S TUNEUP: Gargon Does the Dowd

A version of this was published in The Santa Fe New Mexican
June 28, 2013 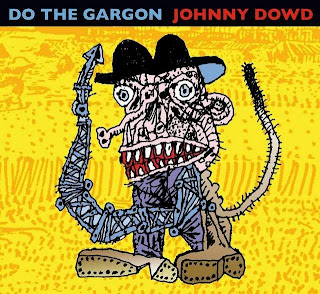 I never would have thought that in 1998 when I first heard Johnny Dowd’s first album, Wrong Side of Memphis — which at the time I wrote was one of the “strangest albums of the ’90s” — that he would be making another album twice as strange 15 years later.

But that’s exactly what he’s done with his latest, Do the Gargon which will be available in early August. It’s a concept album of sorts, dealing with a mysterious character who might not even be human.

Born in Fort Worth and raised in Memphis and Pauls Valley, Oklahoma, Dowd started a successful moving company in Ithaca, New York, before he began making albums. He was 50 years old when Wrong Side of Memphis came out.

It gives me a certain faith in humanity that regular working guys might have bizarre musical ideas like these “Gargon” songs bouncing around in their heads as they’re moving your furniture. That’s what makes America great.

So who or what is this Gargon? “Gargon was a character that we ran into on the road several different times,” Dowd recently told his local paper, the Ithaca Journal. “The first time was in Denver, when we opened for a heavy-metal band that was dressed as trolls with scythes and robes. They all seemed sort of Gargon-ish, to use it as an adjective.

“I also was thinking of the Frankenstein movies — inside, he was a nice person, with the exterior of a monster. But in these songs, does Gargon appear as a monster with a soft heart or does he appear normal with a monster’s heart?”

As Dowd writes on his website, “All I can say is: look around, look in the mirror, look at me. He is the beast within who got his feelings hurt (boo hoo), he is the boy left at a filling station in the great state of Nebraska in 1953. He says ‘rock and roll will never die,’ and he is a pretty good dancer. That’s why mother married him.”

(Some deep Dowd trivia here: Dowd’s website bio says that his mom married his dad because of his dancing skills. And in the Ithaca Journal interview, Dowd talks about being accidentally left behind at a gas station during a family vacation at the age of 4 or 5. He mentions that story in the title song of this album as well as “Gargon’s Disco Balls.”)

Dowd sings or mostly talks, and he plays guitar here, backed by longtime musical cronies Michael Stark on keyboards and Brian “Willie B” Wilson on drums and bass pedals. Most of the tracks feature an electro-boogie-beat musical backdrop — think a less slick version of “Sharp-Dressed Man”-era Z.Z. Top.

The opening track, “Gargon Gets All Biblical,” starts out with what sounds like a distorted, mutated, synthesized Creedence Clearwater Revival riff. Finally, Gargon speaks. “Wherefore art thou? … Hast thou no mercy ?… On my birth date there was darkness and no breast to suckle. … I am forsaken.” Later in the song, Gargon addresses a woman. “Oh my damsel, so sweet, so fair/My misery with you, I’d love to share.”

This is followed by three and a half minutes of rocking Dowdian madness in a song called “Shaquille.” No, I haven’t quite figured this one out yet as some of the lyrics are incomprehensible.

Gargon reappears in a song titled “Nancy Sinatra.” Here, we learn about another side of the character. “Gargon has a miniskirt he wears to places fancy/In a pair of go-go boots he borrowed from Nancy Sinatra/Gargon is a beast, walkin’ kind of prancy/Like a robot ballerina down the Strip with Nancy Sinatra.”

Dowd reveals more aspects of the title character. In the slow, spooky dirge from the dark dimension called “Girl in the Suitcase,” we learn that Gargon was once in love with a red-headed girl from a shantytown. At the tune’s end, Dowd sings, “All things pass/It’s only memories that last/She’s in his suitcase, his only memory that lasts/He’s in love, in love.” A listener is left wondering if there are human remains in that suitcase.

Then in “Touch Her Cheek,” which has a bluesy hook similar to that of Frank Zappa’s “I’m the Slime,” we find out that Gargon has a tender side. “Gargon would cut off his arm just to touch your cheek/With his other arm, he would touch your cheek.”

The first half of the nearly six-minute” Butterflies and Unicorns” sounds like a weird marriage between Black Sabbath and ’70s jazz fusion. But then the tempo slows down, and Dowd’s guitar gets psychedelic, with hints of Funkadelic’s “Maggot Brain.” Meanwhile, Dowd recites more Gargon tales: “Gargon with his iron lung/He says that every single song has been sung.”

Not all of the songs deal directly with Gargon. For instance, “Pretty Boy” is a comical look at a sharp-dressed man. “I want to kiss myself, ’cause I’m so pretty,” Dowd declares. “I’m a big-town playboy out of Oklahoma City.” I’m betting this tune has its origins in an obscure early ’60s cat called Lord Sundance, whose songs “Pretty Lord Sundance” and “The Return of the Pretty One” tell the story of another guy who wants to kiss himself. (The narrator of “Shaquille” wants to kiss himself too. Coincidence?)

Musically, this is one of Dowd’s most rocking records. However, I miss the concise storytelling found on his previous works. Earlier albums showed that Dowd has the ability to deliver deep and disturbing sagas of small-time criminals, humiliated lovers, stalkers, and various other kinds of outcasts wrapped in neat three- or four-minute packages.

This album is a look at one character, the enigmatic Gargon, from a variety of angles. It’s an interesting experiment, but I hope Dowd hasn’t completely abandoned the elements of his songcraft that made us love him in the first place.


Did the above song come from the one below?