A version of this was published in The Santa Fe New Mexican
June 14, 2013 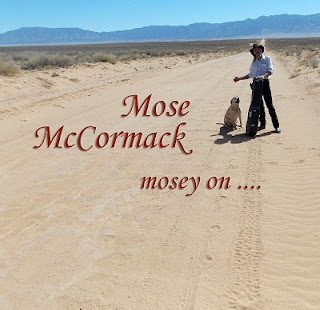 The last time that Mose McCormack, the Alabama-born country singer and songwriter now living in Belen, released an album (2009’s After All These Years), I noted that it had been 12 years since his previous record, Santa Fe Trail. And it had been 16 years between Santa Fe Trail and the one before that (1981’s Mosey Mac).

So, I’m happy to report that McCormack’s new one, Mosey On … is out a mere four years since the last one. For McCormack, that might be a land speed record.

I’m even happier to report that once again McCormack has created an ace collection of songs. Though he’s not nearly as famous as he ought to be, McCormack is a credit to the entire genre of country music.

I recognize a handful of these tunes from a live performance on my radio show The Santa Fe Opry a few years ago.

Among those are the best tracks on Mosey On … . First there’s “Under the Jail,” an outlaw tale that starts out with the line “Robbed a bank in Colorado/I rode my horse to death near the Taos County line.” The refrain begins with a little Woody Guthrie populism: “Stealin’ is stealin’ far as I can tell/ The outlaw and the banker meet on the road to hell.” But then the tone shifts to “Mama Tried” guilt: “Mama always told me, I remember well/‘Son, they’re going to put you under the jail.’ ” I think we can all agree that being under the jail is worse than being inside the jail.

Even better is the song “Hillbilly Town.” McCormack’s radio performance of this was jaw-dropping, and the studio version is strong too. It starts off with McCormack’s lonesome harmonica before the whole band comes in, with keyboardist Dick Orr’s organ in the lead. The lyrics tell the story of a young musician “determined to float while all around him drown.” The protagonist’s quest for stardom leads him to places like “the alley behind the peep shows and the lower Broadway bars.” But he’s determined to hold on to his dignity. “Play it like a gunslinger before they shoot you down./But you play it like a bluesman in some hillbilly town.”

My other favorites here include the Tex-Mex-flavored “Naco Jail” (yes, another jail song). You know that correctional facility — maybe even under that correctional facility — is where the narrator is heading when he sings, “Well, the bartender liked my horse, and his wife she loved my eyes/And I knew I was in trouble when her hand fell to my thighs.”

“Native Son” stands out because it’s actually closer to rock or blues than country, with a crime-jazzy hook that Stan Ridgway could sink his teeth into. I was listening to it one day last week after reading several stories about government surveillance, the PRISM program, etc. These lines from the song reached out and hit me: “He’s changing his ID, taking it on the lam/’Cause in computer justice, call it Big Brother watching you/What have you done?/There goes another native son.”

Not all of McCormack’s songs deal with fugitives from justice, jails, and seedy cantinas. For instance, the banjo- and fiddle-driven “Honeysuckle Vine” is nothing but a sweet love song. “Sweeter than molasses, that pretty little gal of mine/When she wraps her arms around me like a honeysuckle vine.” On “Mr. Somebody,” a cool honky-tonk shuffle, the narrator is a middle-aged guy who realizes that his youthful “dreams of flying” are now dreams that are dying.

Like nearly all of his albums since his 1976 debut Beans and Make Believe, Mosey On … was recorded at Albuquerque’s John Wagner Studios. Wagner plays guitar, accordion, and drums on the record. McCormack has a sturdy bunch of New Mexico musicians behind him.

And almost every time I play this record, I find something else to like about it — a fiddle lick, a clever lyric. I just hope it doesn’t take years and years for McCormack to do another record. 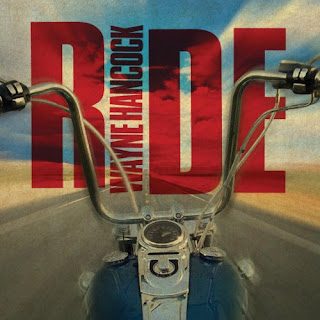 * Ride by Wayne Hancock. Apparently in the past few years, Wayne “The Train” could have turned into Wayne “The Train Wreck.” His wife left him, and he ended up in rehab a couple of times. His backup band broke up. And if you think that sounds like a recipe for some country songs, you’re thinking right. Hancock — a master country traditionalist whose blend of juke-joint blues, western swing, rockabilly, and Hank-style heartache songs — unabashedly writes about his life.

It’s obvious from the first line of the first song, the title track. “Well, me and my baby was splittin’ up, and I’m feelin’ really bad inside.” Then in “Best to Be Alone,” Hancock moans, “I had a good gal that I loved so/We both got married, not long ago/But then my drinking got in the way/So she left me, a year ago today.” “Fair Weather Blues” might remind Bob Wills fans of “Trouble in Mind,” but lines like “I’m gonna lay down my sorrow/And listen to the falling rain/I feel so lonely/But the thunder will ease my pain” remind me of Hancock’s own “Thunder Storms and Neon Signs.”

So, yes, in some ways, this is a country confessional album. But don’t think for a second that it’s all cry-in-your-beer music. For instance the song “Ride” isn’t so much about Hancock’s marriage as it is about the joys of motorcycles. It’s an upbeat, rocking little tune with some mean guitar solos. And just because he has sobered up doesn’t mean he can’t sing about strong drink. He does that in “Cappuccino Boogie.” Hancock sings, “Well I dig a java shot with the gone girl at the counter/I get a triple shot brother just to be around her.”

One of the strongest songs here is “Deal Gone Down,” a brutal little tale based on a true story about a guy who went into some Texas juke joint — his wife had been having an affair with the bartender — and he shot up the place and killed a bunch of people. “Well that was 30 years ago but it seems like it was yesterday/And all the blood turned to dust, and the rain came and washed it away.” And that’s why I love country music.