Tonto's Lonesome Dirge: The Lone Ranger and Me

A story I wrote for today's New Mexican, about the first time Hollywood shot a Lone Ranger movie in Santa Fe brought back a lot of personal memories from 33 years ago. 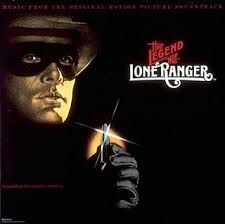 In the spring of 1980 I had a weekly Sunday night music gig at The Forge, a bar located at The Inn of the Governors where Del Charro is now. I also was freelancing for The Santa Fe Reporter -- mostly music stories at that point, reviews, interviews, etc.

But one Sunday night in late May of that year, something happened during my Forge gig that helped turn me into a newsman.

A guy at a table started getting angry and noisy, accusing people of stealing money from him. He started toward the exit, shouting obscenities then picked up a wooden chair and hurled it, hitting a woman in the head.

I learned this guy was on the crew of The Legend of the Lone Ranger, which was shooting in the Santa Fe area at the time.

Most people I knew had thought it was pretty cool that they were shooting that movie here. Film industry promoters had estimated that the movie would boost the local economy to the tune of $4 million or $5 million.

I'd even written a song called "Tonto's Lonesome Dirge," based on the Lone Ranger mythos -- and influenced by Carlos Castaneda's Don Juan books.

One step at a time, now, kemosabe

This desert is a most mysterious place ...


I fantasized some big-shot Hollywood type would stop by The Forge for a drink, hear my song and would be so impressed he'd put it in the movie. (Didn't happen. Instead they used a song by a better-known singer named Merle Haggard.)

But the night of the chair-throwing incident I learned that the staff and the regulars at The Forge had become pretty fed up with the Lone Ranger. This wasn't the only incident at the bar involving folks from the movie. In fact, just the night before, the Lone Ranger himself -- actor Klinton Spilsbury had caused a ruckus there, throwing drinks, grabbing a microphone from a singer, banging on a piano while the band was trying to play. (I was friends with that band, a folk group called Distilled Spirits.)

People ought to know about this, I thought. So I talked to the news editor at the Reporter, Marty Gerber and he told me to talk with people involved and put something together.

It was my first attempt at writing a news story. And I suppose that was painfully obvious to the editors. My story was heavily re-written. In the published version I was quoted as a source because I witnessed the chair-throwing incident.

So I didn't get a byline. But I got the bug.