If anyone was ever dumb enough to put me in charge of a radio station, I would mandate that every morning at sunrise we'd have to play this song. 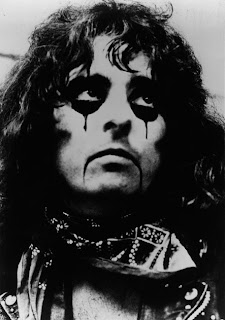 "Sun Arise" appeared on Alice's greatest album Love it to Death in 1971, (following the creepy classic "The Ballad of Dwight Fry.") I actually like the album version best, but I couldn't resist posting this grainy, 40-year-old footage that gives the song a proper primordial feel.

The song was written by Australian novelty singer Rolf Harris, (most famous for "Tie Me Kangaroo Down"), but it's based on Aboriginal music.

(I used to have the album pictured below)

I can't help but think that everyone's day would go a little better if it started off with this song.