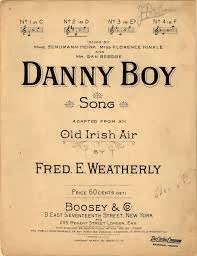 "Danny Boy" is one of those songs that you might assume has been around since the dawn of history. But according to a story on the BBC website today, "Danny Boy" as we know it was first published 100 years ago.

The origins of Danny Boy have long been the subject of debate.
The melody itself is believed to have been penned by the blind Irish harpist Rory Dall O'Cahan in the late 16th or early 17th Century.
Folk legend says that Rory, having collapsed drunk one night by the riverside, heard fairies performing a melody on his harp.

The melody is known as "The Londonderry Air."

Several lyricists attempted to put words to the tune, but it wasn't until the 20th Century that it merged with the words we know today.
Fred Weatherly, an English barrister who moonlighted as a songwriter, had written lyrics for a song named Danny Boy in 1910.
His Irish-American sister-in-law Margaret Weatherly sang him the melody of the Londonderry Air.
Fred adapted his lyrics to the tune to create Danny Boy, which was published in 1913. No credit was given to Margaret - who died penniless in 1939

There's a zillion easy-listening versions of "Danny Boy." But I prefer The Pogue's take on the song.


And here's Johnny Cash's version, including the story of how the song came to him.