Making a tribute album honoring the music of Tom Waits isn’t a new idea. A few of them have come out over the years, though since Waits’ stature, especially among his fellow artists, it’s actually surprising there haven’t been more. (A good surprise, I have to say, considering that most tribute albums suck out loud.)

Speaking of surprises, I just stumbled across a various-artists Waits tribute that might just twist your head off. Shirim Meshumashim — in English, “Used Songs” (which is also the name of a Waits “best-of” compilation a few years back) — features songs by an assortment of Israeli musicians little known outside their own country.

All of the 22 songs, compiled by Israeli producer Guy Hajjaj, are sung in Hebrew. Don’t worry if you’re like this Okie goy boy and don’t understand a word of that language. This only adds an element of mystery and majesty to the music. That’s apparent from the opening of the first song, “Clap Hands” by Yaron Ben Ami & Noa Golandski. The duo recites an a cappella, sing-song nursery rhyme (one of them in a mocking falsetto voice) before starting the actual song. The effect is impressively spooky.

A recent review of this album in the online Heeb magazine (an irreverent “lifestyle” publication aimed at young Jews) sums it up best: “Tom Waits always seemed to me to have more in common with biblical prophets than he did with other musicians. Listening to his gravely yowl, it’s not hard to imagine Waits in good company next to the wild haired, wild eyed madmen of the Bible, who stumbled out of the desert with evil visions in their heads, declaring to anyone within earshot that, yes, they’d seen God in the wilderness, and boy was he pissed.”

As is the case with any tribute album, the contributions that work best are the ones that take some subtle liberties with the source material but capture the original artist’s spirit. A good example of this is Ursula Shwartz’s take on “God’s Away on Business.” With a steady trombone and urgent rhythm, Shwartz’s multitracked vocals sound distant and understated.

Meanwhile, Einav Jackson Cohen & Iddo Sternberg offer a tense, minimalist version of “Lie to Me” featuring hand claps, piano, and a slide guitar, while Shany Kedar makes “I Don’t Wanna Grow Up” into a cool singalong. Though she mostly employs acoustic instruments (even ukulele), Kedar seems to draw, spiritually at least, from The Ramones’ cover of this song as well as Waits’ original. 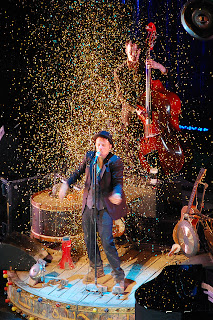 Yes, there are some disappointments, including “A Little Rain” by Tal Cohen-Shalev and David Blau’s version of “Martha.” I’m prejudiced, because these are not my favorite Waits songs, but neither artist lifts them beyond inoffensive folkie dribble. And poor Ze’ev Tene was up against not only Waits but Waits’ duet partner Keith Richard on the immortal after-hours barroom lament “That Feel.” Tene doesn’t even attempt to sing it, instead choosing to recite it. Though he’s not speaking French, his delivery reminds me of Maurice Chevalier.

But see for yourself. You can listen for free to the stream of any or all of the songs from Shirim Meshumashim HERE (or on the widget below). If you want to download the album, you can name your own price.

Below are some previous tributes to Waits: 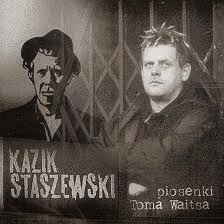 * Piosenki Toma Waitsa by Kazik Staszewski. This album by Polish rock star Kazik Staszewski should have become a classic. It’s the only other foreign language Waits tribute I'm aware of, so if you like Shirim Meshumashim, definitely seek this out. As I said when I reviewed this album in 2004, Waits’ music has detectable Eastern European influences. You can hear it in his songs like “Cemetery Polka,” “Innocent When You Dream,” “Underground,” and “I’ll Be Gone” (all of which Staszewski covers on this album) and in the entire album Blood Money, which he wrote for a theater production of the tragic Woyzeck. (Staszewski does three songs from that.) Kazik's tribute also has a version of “In the Neighborhood,” which he turns into an eight-minute odyssey. This record isn’t easy to find, but you can order it for a fairly reasonable price online at D&Z House of Books in Chicago.
as I know) foreign-language album of Waits tunes, so if you like Shirim Meshumashim, you definitely should seek this out. As I said

* Wicked Grin by Johnny Hammond. This 2001 album by veteran blues interpreter Hammond captured Waits’ blues spirit. With help by sidemen including keyboardist Augie Meyers, harmonica man Charlie Musselwhite, and Waits bassist Larry "The Mole" Taylor, this album, which Waits produced, has excellent versions of “Heart Attack and Vine,” “Get Behind the Mule,” “Murder in the Red Barn,” and “Big Black Mariah.” The album ends with a gospel tune called “I Know I’ve Been Changed,” which is a rowdy duet between Hammond and Waits himself. (It has never appeared on a proper Waits solo album, but you can find some videos of Waits doing it on Youtube.)

* Step Right Up and New Coat of Paint. These collections, both released by Manifesto Records, are fairly typical 1990s-style tribute albums (though Paint was released in 2000) with lots of alternative stars taking a swing at Waits tunes. A large number of the tracks are bland and forgettable, but a few covers are good. Step Right Up — at least later digital versions of the album — includes a jaunty “Heart of Saturday Night” performed by Jonathan Richman and a nice and crazy Giant Sand version of “Invitation to the Blues.” New Coat of Paint’s highlights are Lydia Lunch’s brutal “Heart Attack and Vine,” Screamin’ Jay Hawkins’ “Whistlin’ Past the Graveyard,” and Carla Bozulich’s sad and beautiful “On the Nickel.” 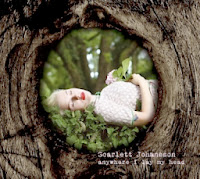 * Anywhere I Lay My Head by Scarlett Johansson. OK, even though I have a weird fondness for “Golden Throats” material — songs performed by non-musician celebrities — and even though it was produced by Dave Sitek from TV on the Radio, and even though The Village Voice in 2008 raved “Pretty Good, Actually!” I confess I’ve never been able to bring myself to listen to this album. It’s available on Spotify, but I think I’ll just let the mystery be.

And here's one of my all-time favorite Waits covers. It's by the late King Ernest.