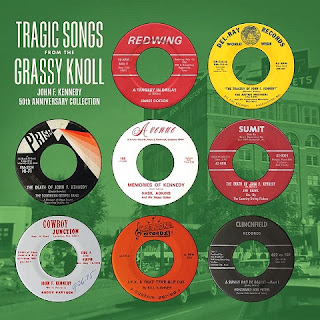 Tragic Songs From the Grassy Knoll is a rather cheeky name for a collection of songs about the assassination of President John F. Kennedy -- which is exactly what fans of the fun-loving Norton Records have come to expect from the label from Brooklyn, N.Y.

But the title is one of the few irreverent things about this album. All but arguably one of the 16 songs here are dripping with sincerity and profound grief over the murder of the president.

The performers here are mostly obscure country singers who recorded their heartfelt odes to JFK on a galaxy of tiny, obscure, regional labels like Avenue, Prism and Cowboy Junction.

In fact, I'd only heard of two of the performers on this collection: The late Hasil Adkins (who has two songs here, both titled "Memories of Kennedy," both of which are uncharacteristically somber for the normally hyper-exuberant West Virginia wild man) and Homer Henderson, a one-man band from Dallas.

The original recording of Henderson's most famous song, "Lee Harvey Was a Friend of Mine" is here. This song has become something of an underground classic, recorded by artists including The Asylum Street Spankers, T. Tex Edwards, Laura Cantrell and New Mexico's own Boris & The Saltlicks. It's the story of a youngster who was a neighbor of Lee Harvey Oswald's. ("He used to throw the ball to me when I was just a kid / They say he shot the president, but I don't think he did.") 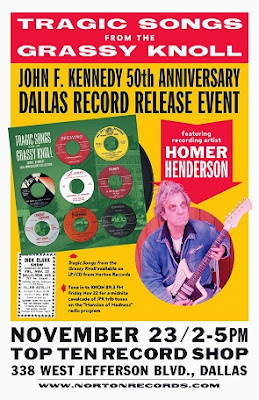 Originally released in 1985, "Lee Harvey" is the most recent vintage recording on Grassy Knoll. It's also the only one that even mentions the possibility of a conspiracy.

Immediately following the assassination, the immediate reaction was grief and a sense of patriotic shock. Most of these singers were more concerned about mythic notions of the brave commander-in-chief struck down while trying to spread freedom and liberty and sentimental images of Jackie placing her wedding ring into the hands of her husband's corpse than niggling cynicism dealing in magic bullets and grassy knolls.

"The Tragedy of John F. Kennedy" by The Justice Brothers, which uses the melody of the old murder ballad, "Knoxville Girl," as performed by The Louvin Brothers. In "JFK and That Terrible Day," Bill Kushner recites the lyrics over the melody of "Battle Hymn of the Republic" played on organ and piano.

One of the later songs included here, released sometime after the 1968 killing of Sen. Robert F. Kennedy, is one called "Two Brothers" by a singer named Bobby Jenzen. He refers to the Kennedy Brothers as "two of America's greatest men. Speaking rather than singing the verses of the song, Jenzen says, "It's ironic that the wrongs they tried to right would be the wrongs that struck them down. ... As Americans we should all feel ashamed that this kind of evil lives among us."

The idea of innate "evil" being responsible for Kennedy's killing pops up in "A Sunny Day in Dallas Part 1" by The Honorable Bob Peters (apparently he  became honorable by serving as a state senator from Tennessee), who says JFK was "the victim of the hatred and prejudice of man." As reporter Scott K. parks wrote in a recent historic piece in The Dallas Morning News, "The image of Dallas as a bulwark of right-wing extremism lodged in the American mind during the early 1960s ...  Dallas became known to the world as the city of hate, the city that killed Kennedy."

But Texans being Texans, there has to be at least song that's extremely defensive about the Lone Star State and it's part in the assassination. In "Don't Blame the State of Texas'" singer Lowell Yoder basically washes the state's hands of any responsibility. It contains a curious chorus, in which Yoder offered what almost sounds like a veiled threat: "Don't blame the state of Texas and Texas won't blame you."

While listening to this album, I was struck by the fact that there were so few songs at the time by mainstream artists dealing with the assassination.

Three years after the events at Dealy Plaza, The Byrds did a sad but beautiful song called "He Was a Friend of Mine" (rewritten from an old folk song that had nothing to do with Camelot) and a few years later, following the killings of Robert Kennedy and Martin Luther King, Dion had an actual radio hit with "Abraham, Martin and John" It wasn’t until years later that I heard Jerry Lee Lewis’ 1966 assassination song “Lincoln Limousine.”

I guess at the time, the radio, major record companies and Dick Clark weren't interested in downer material about assassinations. So these songs from unknown singers on unheard-of record labels actually represent folk music in its purest sense -- honest musical reactions by real people to a major historical event. Corny as some of the tunes are, the compilation is a valuable historical document. 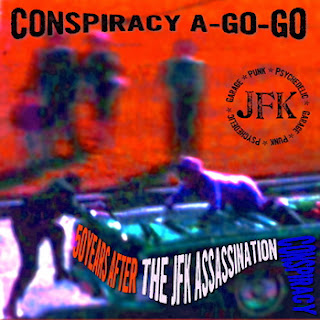 * Conspiracy a-Go Go by Various Artists. This is a free MP3 compilation of JFK assassination songs by (mostly unknown) garage/psychedelic, punk and noise bands put together this year by Todd Gardner of the Turn Me On Dead Man internet radio show.

Unlike the reverent singers on Tragic Songs from the Grassy Knoll, the bands on this collection go full throttle down the conspiracy rabbit hole. You can tell by the titles of some of the songs – “Back and to the Left” (a reference to the Zapruder film) by JFn’K; “Kennedy’s Head” by Buckwheat Caterpillar (“We all want to know about Kennedy’s brain … / The government lost it, that’s insane,” goes one verse.) – and even some band names: Single Bullet Theory (who do a crazed Butthole Surfers-like tune called “Exploding Castro Cigars”), The New Jack Rubies among them.

Among the highlights here are “Bullet” by Hounds, Hounds Hounds (who apparently never listened to Lowell Yoder’s song, as the singer declares, “Texas is the reason that the president’s dead”); the hard crunching “Mark My Words” by Black Rabbit; “Get Out of Dallas” by fellow GaragePunk Pirate Radio podcaster Mal Thursday and his band The Cheetahs; and “O.H. Lee,” which actually is a rocked-out mutation  of “Lee Harvey Was a Friend of Mine” by the Arkansas punk band The Rockin’ Guys, which was part of their Assassination EP a few decades ago.

(Disclosure: Knowing The Rockin’ Guys had done that EP, I alerted their singer Rockin’ Dan to this project a few months ago after seeing a solicitation for submissions. Apparently Dan followed through.)

Download any or all songs from this compilation for free HERE or from the widget below:


And check out Turn Me On Dead Man’s massive list of JFK assassination songs HERE.