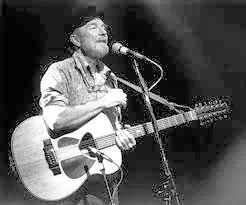 Anyone who knows me knows that I wasn't a big Pete Seeger fan. In fact, the very first article I ever wrote that evoked angry letters to the editor was a rather snide review of a Seeger concert at Paolo Soleri in 1980.

(An old acquaintance, Bob Stearns, reminded me of that just a few days ago. His late wife Rose Mary wrote one of those letters. We all got to be friendly not long afterward despite that disagreement.)

When it came to folk music, I always was more in the camp of rough 'n' rowdy types like Dave Van Ronk. But that's neither here nor there. I was saddened by Pete's passing.

But one thing I admired about Pete Seeger was the way he stood up to the communist witch-hunters during the McCarthy era -- even though it seriously hurt his ability to earn a living.

This from the New York Times obit for Seeger:

In 1955 he was subpoenaed by the House Un-American Activities Committee. In his testimony he said, “I feel that in my whole life I have never done anything of any conspiratorial nature.” He also stated: “I am not going to answer any questions as to my association, my philosophical or religious beliefs or my political beliefs, or how I voted in any election, or any of these private affairs. I think these are very improper questions for any American to be asked, especially under such compulsion as this.”


Mr. Seeger offered to sing the songs mentioned by the congressmen who questioned him. The committee declined.


Mr. Seeger was indicted in 1957 on 10 counts of contempt of Congress. He was convicted in 1961 and sentenced to a year in prison, but the next year an appeals court dismissed the indictment as faulty.

Plus, I've always loved this song.