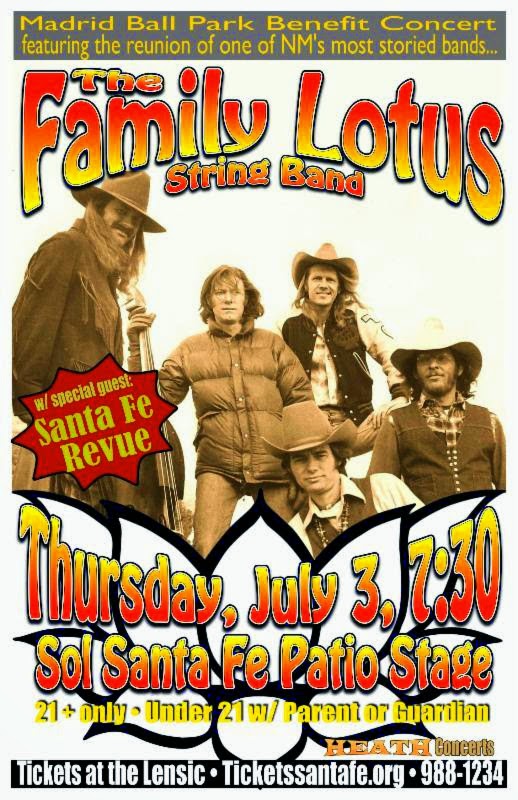 I missed the big Family Lotus reunion last year. (Good excuse: I was kidnapped by Satan's minions to make a blasphemous video)

"We put the band together in 1968," Lotus mainstay Jerry Faires told The New Mexican last year. "Our first gig was at Quixote's Horse, which was a bouillabaisse restaurant on Galisteo Street. We played for tips and soup. Then we were at Claude's Bar on Canyon Road for a long time. Lumbre Del Sol, The Last Mile Ramblers, and Family Lotus -- between the three of us we were the house band in this whole area."

That New Mexican article, by Paul Weideman, went on

"In the summer of 1974, the group played the Institute of American Indian Arts, accompanying bluesman Taj Mahal performing `the people's revolutionary music of Jamaica.' A pair of gigs at St. John's College featured Family Lotus along with Allen Ginsberg, Ram Dass, Gary Snyder, and Alan Watts. The band opened for R & B guitarist Bo Diddley and jazz saxophonist Charles Lloyd; the latter told Faires, `Your music touches many shores.'"

I first saw The Family Lotus at the UNM Student Union Building Ballroom, when they opened for Bo Diddley the first week I went to college. The event was called The Second Annual King Kong Memorial Tribal Stomp. The Lotus became my favorite New Mexico band that night.

Speaking of videos, here's one I spotted on Youtube of the Lotus at the honky-tonkin' Gold Inn in the early '80s (before it burned to the ground).