SINGING DIRGES IN THE DARK

A few weeks ago I was arguing on Facebook with my old pal Gary Heffern (a wonderful songwriter and singer by the way) about which year it was that we saw Tom Waits during South by Southwest. I said 1999. He thought it was a few years before that. That prompted me to look up the article I did about SXSW that year.

Re-reading the article I realized this time, right before the turn of the century was a strange time for the music industry. The old world seemed ready to crumble. Big changes seemed to be in the air.

A lot has changed in the past 14 years. But much has remained the same in the music world. Worthless crap still dominates the mainstream. Weasels still run the show. And there's still plenty of great stuff for those bothering to look for it,

Here's that article from the mists of time. And, dammit, I was right about the year we saw Waits.


A version of this was published in The Santa Fe New Mexican
April 11, 1999

AUSTIN -- His name was up on the theater marquee:

Hundreds of people snaked around the block in a long, unruly line waiting for the doors of the stately old Paramount Theater to open.

Waiting for Waits. The Big Time!

An old rock critic cliche‚ goes something like, ``In a just world, (Tom Waits, Richard Thompson, Lucinda Williams, or whatever brilliant but under-recognized performer is being reviewed) would be a major star.''

Well, here was that ``just world'' where Waits' show one of just a handful of public concerts he has performed in the past decade was being treated as the second coming of Frank Sinatra.

Waits' wonderful Saturday night/early Sunday morning performance was clearly the highlight of this year's South by Southwest Music Festival, and certainly the most talked-about show of the 800 or so ``official'' festival shows between March 17 and 21.

And gravel-voice Tom wasn't the only non-mainstream performer whose show drew a capacity crowd. The avant-garde band Mercury Rev as well as rockabilly queen Wanda Jackson, who hasn't had a hit in 40 years, packed 'em in as well. 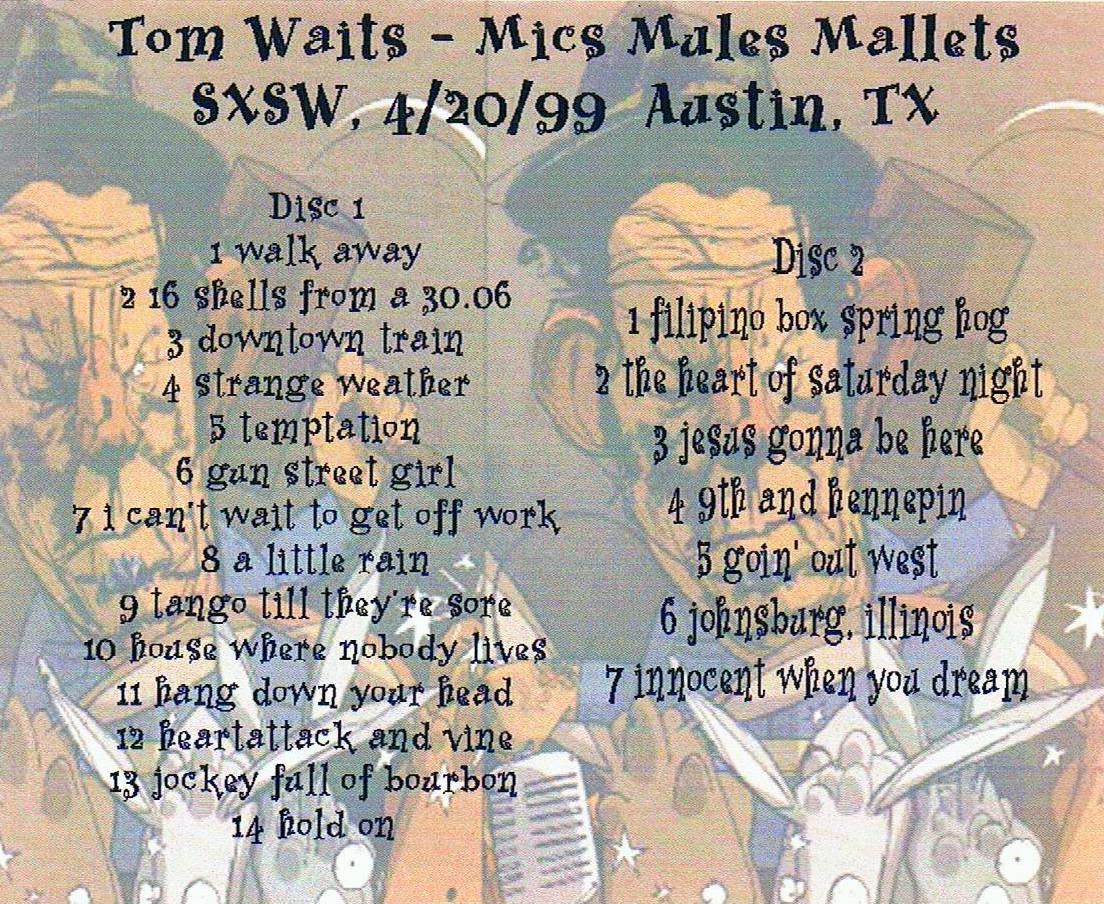 But there was something ironic about this ``just world.'' Here was Waits being honored by a convention full of music industry heavies at a time when he is about to release an album on an independent punk rock label (Epitaph, owned by Brett Gurrewitz of Bad Religion) after 20-plus years on major labels.

Indeed, while the music, merriment and Mexican food, the bands, beer and barbecue were as great as ever during South by Southwest, there was a distinct undercurrent of doom at the convention. Much of this was brought on by the current flurry of corporate mergers, which has resulted in consolidation of labels and massive lay-offs in the industry.

There's the ever-worsening problem of commercial radio becoming more staid and irrelevant as radio stations continue to tighten play lists. This trend coincides with that of more stations being bought up by fewer owners.

And then there's that looming 500-pound gorilla known as the Internet. MP3 technology, which allows computer owners to download near-CD-quality music directly from Web sites, is seen as a ray of hope for independent musicians and music lovers and as a threat by the major record companies.

(Last month, according to a report on Sonic Net, an Internet music news site, the International Federation of the Phonographic Industries filed a legal complaint in Oslo against FAST Search and Transfer, the Norwegian technology company that powers Lycos' ``FAST MP3 Search'' site. The Recording Industry Association of America, which is affiliated with the international organization, announced last week that it is considering a lawsuit against Lycos.)

One way or another radical changes are in the air.

``I don't think major labels are working anymore,'' singer Lucinda Williams told hundreds of music-bizzers gathered for the convention's keynote address. About half the audience sat silent while others applauded wildly. ``I think it was a good idea at one time, but it has just crumbled.''

At a press conference after her speech, Williams said she is considering starting her own company, as her friends Steve Earle and John Prine have done. She noted how Prine, who started Oh Boy! Records years ago, has made a comfortable living without the pressures and creative restrictions that go along with working under contract for a large corporation.

But the state of the music industry is just a reflection of the country itself, Williams said. Then she added sadly that she believes America is ``dying a slow death.''

But she also said, ``I'm one of those people who still believe that music can change the world.''

Williams whose Car Wheels on a Gravel Road recently won a Grammy (``Best Contemporary Folk Album'') and was voted top album of the year by hundreds of music critics from across the country in the annual Village Voice poll also spoke about the importance of standing up to would-be censors in the media.

She told how on a recent appearance on the Today Show, she was asked to change the lyrics of her song "Right in Time." The line, ``I lie on my bed and moan at the ceiling/Oh, my baby'' was, well, a little suggestive, some producer told her.

But on the same show, Williams noted, a guest was there to ``discuss the stain on Monica Lewinsky's dress.'' Said the singer, ``I went ahead and sang the song as I had written it. Nobody got hurt.''

She told about her appearance on the Crook and Chase show, in which she was asked not to do "Pineola," a song about suicide, because it was ``too dark.'' (She said she did the song anyway.)

While there was no shortage of good-time tunes played during the festival, often heard were ``dark'' songs that highlighted these tensions.

On Friday night, Santa Fe resident Terry Allen performed a song from his new album Salivation, a Mideastern-influenced dirge called "The Doll," a cry against the rampant materialism that seemingly drives the country today.

``So we kneel down at the altar/ Of the Church of the Bought and Sold/pray the dollar does not falter/makes us rich before we get old ... and the money changers come howlin'/Through the temples of our needs/ while the doll is out there prowlin'/holding notes on all our dreams ...''

Earlier that night, the raucous Waco Brothers romped through a fire-breathing set in the tent-covered back yard of the Yard Dog folk art gallery for the annual party for Bloodshot Records, a small but influential independent ``insurgent-country'' label from Chicago. But beneath their drunk, cowpunk exterior are doom-laden lyrics that ensure they will never be asked on The Today Show.

``That good old rock where we once stood has got too old to do much good/And the good old ways are sick and lame/Third World on horseback/Cowboy in Flames!'' singer Jon Langford (also from the band The Mekons) snarls.

Then Langford sings about "The Death of Country Music: ``So we spill some blood on the ashes/ of the bones of the Joneses and the Cashes/ Skulls in false eyelashes, ghost riders in the sky.'' A listener realizes that indeed the stale music product coming out of Nashville today indeed is lifeless. But there is so much life in the Wacos' death dance, it's obvious that the old spirit is springing up in new forms.

That spirit can be heard in the hard rock of Wayne Kramer, an old member of the MC5, a Detroit band of the late '60s known as much for its radical politics as its music. Kramer, who has released several solo albums on Epitaph Records in recent years, has lost his hair and ditched his old drug habit, but not his political attitudes.

In his song "Revolution in Apt. 29," he chided armchair revolutionaries: ``We'll write a manifesto after chips and pesto ... the beer is imported/We refuse to be thwarted.''

But that Friday night at Emo's, Kramer got his biggest crowd reaction with his version of the old MC5 classic battle cry, "Kick Out the Jams." Despite all the ridicule and derision of the past three decades, it seemed that a spark of that old '60s revolutionary zeal was still alive.

The Heart of Saturday Night

Wanderingly blissfully out of the Paramount Theater, the melody of Tom Waits' "Innocent When You Dream "lingering in his head, the happy critic wandered over to Sixth Street, hoping maybe to catch the last song or two of the Waco Brothers' ``official'' showcase at the Jazz Bon Temps club. Alas, he was too late. The Wacos audience was already streaming down the stairs of second-story room. By the smiles and the sweat on their faces, it was obvious they had just experienced a great show.

Going back to his rental car, the critic comes upon a street busker playing guitar for a small crowd of Sixth Street revelers that had gathered. They were all singing Don McLean's old hit about the day the music died:

``Bye bye, Miss American Pie/drove my Chevy to the levy but the levy was dry ...''

It seemed like a Tom Waits kind of thing to do, so the critic joined in the drunken street choir: ``Them good old boys were drinking whiskey and rye/singing this'll be the day that I die ...''

Even though some believe the music industry is in its death throes, it was obvious on that Austin street corner that the music will never die.

I couldn't find any videos of that Waits show in Austin. But here's Waits on Letterman that same year.