A version of this was published in The Santa Fe New Mexican
June 13, 2014 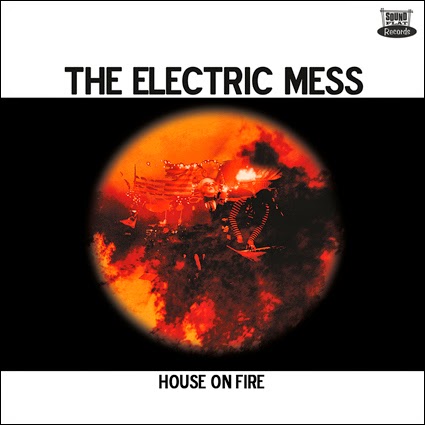 Chances are, unless you live in New York or unless you religiously listen to my radio show, Terrell’s Sound World (which, by the way, you should), you haven’t heard of The Electric Mess. Actually, if not for the glory of the internet — and, specifically, my favorite musical community of recent years, The GaragePunk Hideout — I wouldn’t have heard of this Mess either.

But, by golly, if you like wild, frantic, high-energy rock ’n’ roll, you really need to acquaint yourself with this New York band. The group’s third album, House on Fire, is as good a place as any to start. All 13 tracks are full of fire and craziness. The sound is not drastically different from the band’s first two albums (its self-titled debut from 2009 and 2012’s Falling off the Face of the Earth). But that’s a good thing. If you like this one, you’ll want to seek out those first two.

Fronted by singer Chip Fontaine (real name Esther Crow), the group has a sound rooted in 1960s garage rock but not shackled in nostalgia. True, The Mess is a guitar-based band that features an electric organ (Oweinama Biu), but you won’t get the idea that the musicians are trying to sound like Question Mark & The Mysterians or The Standells (though, at least in their early days, they were known to cover “Sometimes Good Guys Don’t Wear White”).

Fontaine/Crow’s voice reminds me a little of Joan Jett’s. (Here’s a fantasy: a Jett/Crow duet on The Replacements’ “Androgynous.”) House on Fire’s highlights include the opening song, a crazed little rouser called “Better to Be Lucky Than Good,” which could be a grandchild of The Velvet Underground’s “White Light/White Heat.” (One recurring lyric: “They did it all for the white light.”) This is followed by the album’s title song, in which the speed is just as breakneck and intense. “She Got Fangs,” which starts out with a throbbing bass line from Derek Davidson, is a hoodoo-heavy song about vampires: “Vampire woman, can’t you see/What your hunger does to me?” I’m not sure what Jimi Hendrix’s “Third Stone From the Sun” has to do with any of this, but it’s there, courtesy of guitarist Dan Crow (Esther’s husband), during one of the song’s instrumental breaks.

Then there’s “The Thing That Wouldn’t Leave” (the title is from a classic John Belushi Saturday Night Live skit), which is about folks who always wear out their welcomes. And even fiercer is “Leavin’ Me Hangin’,” a song in which the singer expresses displeasure at being stood up. In the middle of the song is a weird spoken-word segment:

“Girl, you ain’t no Queen of Sheba, and I ain’t no piece of liver, but you never deliver. Man’s ego is like a fragile bird, but you step on that bird’s wings one too many times, and he turns into an evil hawk with red fiery eyes, on the hunt for you girl. ’Cause you’re my bird of prey, and this is what I have to say.”

This is followed by a 10-second (yeah, I timed it) scream as the band goes into overdrive.

The final track, “Every Girl Deserves a Song,” starts off fast but then, after a minute or so, slows down into a wah-wah-enhanced groove. (Am I crazy, or do I hear a faint echo of The Allman Brothers’ “Midnight Rider” in here?) “Why don’t you bring some Percocets just to help me cool my jets,” Crow sings. No, you can’t exactly call this song mellow, but after the pace of the first dozen songs, The Electric Mess deserve to cool their jets a little.

Now go get yourself a copy of this album. And tell at least five of your friends. Next time I review an Electric Mess album, I don’t want to talk about how undeservedly obscure this band is. 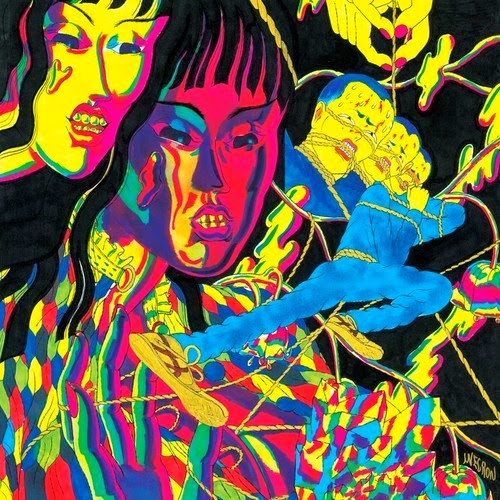 * Drop by Thee Oh Sees. I was just beginning to come to terms with last year’s announcement by Thee Oh Sees frontman and resident wizard John Dwyer that his prolific band was going on “indefinite hiatus.” The group’s album Floating Coffin, you might recall, was my pick for the best of 2013, and its Albuquerque show last fall was one of my favorite concerts of the year.

The bad news is that the band we came to know and love as Thee Oh Sees — vocalist and keyboardist Brigid Dawson, bassist Petey Dammit, and drummer Mike Shoun — seems to be, well, on indefinite hiatus. Dwyer moved from the group’s home base of San Francisco to Los Angeles. I think some of the other Oh Sees scattered as well.

But more good news. Even without the old lineup, Drop is a pretty decent album. Although not as overtly powerful as the magical Floating Coffin, it still has several mighty examples of Dwyer’s fuzzed-out, rubbery psychedelic excursions.

He saved his best for the first three tracks: “Penetrating Eye,” “Encrypted Bounce,” and “Savage Victory,” which make up nearly half the album. These could almost pass for outtakes from Coffin, or perhaps Carrion Crawler/The Dream (2011). One could make that argument for the garagey “Camera (Queer Sound)” as well.

While this is clearly Dwyer’s show, he’s aided on Drop by Chris Woodhouse — a longtime associate of the band — on bass, drums, and Mellotron and Mikal Cronin on alto sax. Cronin is best known as a guitarist (if you saw Ty Segall at High Mayhem a few weeks ago, you saw Cronin). There’s also someone called Casafis on sax.

Unfortunately, after such an auspicious beginning, the album ends with a three-song fizzle. “King’s Nose” sounds like an attempt to channel Electric Light Orchestra. “Transparent World” is plodding and over-synthy. And the closing number, “The Lens,” is uninspired wimp rock. Come on, Dwyer, lose the damned Mellotron!

Although Drop is a welcome addition, I’m not sure what the future of Thee Oh Sees is. Dwyer recently released an electronic album called Hubba Bubba under the name of Damaged Bug.

Here's some videos from these bands