Beyond The Monster Mash: A Handy Guide to Halloween Music

Hosting a Halloween party and don't know what to play?  Here's some suggestions. Best album to use when greeting trick or treaters at your door: Blood by Stan Ridgway & Pietra Wextun. (This is instrumetnal music that's a hundred times creepier than your typical "haunted house" soundtracks.

Best Werewolf Song: Warren Zevon would rise from the dead and  rip my lungs out, Jim, if I didn't say "Werewolves of London" (though "I Was a Teenage Werewolf" by The Cramps is up there too.)

Best Ghost Song: "Ghostriders in the Sky" (So many artists have done this one I did a Tune-up column on it a few years ago. My favorites still are the versions by Lorne Greene and New Mexico's own Last Mile Ramblers.

Best Satan Songs: Tie: "Satan's Bride" Gregg Turner and "I Lost My Baby to a Satan Cult" by Stephen W. Terrell. (The Devil loves cheesy self-promotion. See video and Soundcloud post at bottom of this post)

Best Country spook song besides "Ghost Riders": "Long Black Veil" written by Danny Dill and Marijohn Wilkin,  originally recorded by Lefty Frizzell and later recorded by The Band, Johnny Cash and many others. Honorable Mention: "(It Was a) Monster's Holiday" by Buck Owens. 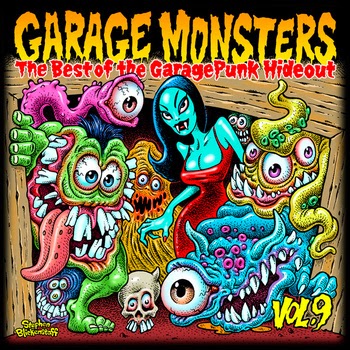 Best Voodoo Rock : Gris-Gris by Dr. John, The Night Tripper (1968). Honorable mention: "Papa Legba" by The Talking Heads from True Stories. (Seek out the version with Pops Staples on vocals.)

Classic Halloween albums from this Century: Mondo Zombie Bugaloo by The Fleshtones, Southern Culture on the Skids and Los Straitjackets; Zombified by Southern Culture on the Skids; Rob Zombie presents Captain Clegg & The Night Creatures (haunted honky-tonk performed by Texas country singer Jesse Dayton); Buy a Gun, Get a Free Guitar by Deadbolt (an earlier version of this album was called "Voodoo Moonshiner"); Garage Monsters: The Best of the Garagepunk Hideout Vol. 9.

My own (free!) online Halloween contributions: On my monthly Big Enchilada podcasts, I've been doing annual Spooktaculars since 2008. Find them all HERE And for users of Spotify, check out my Halloween Spook Rock playlist.

And here's some other Satanic madness