The Spookiest Song Ever 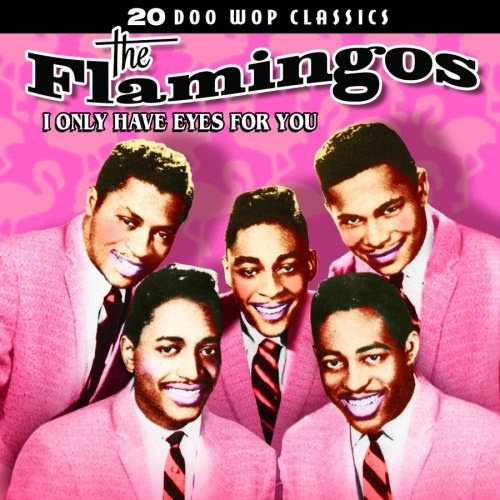 In this season of Halloween, there's much debate about what is the spookiest song ever recorded.

It certainly ain't "The Monster Mash."

I believe in my heart that honor belongs to The Flamingos’ “I Only Have Eyes For You.” This is a ‘50s classic that I first heard as a very young child.

Its ghostly but gorgeous melody and the harmonies are nothing short of otherworldly. But even more strange are the do-wop nonsense syllables that sound like jungle chants Are they saying Beelzebub at the end of every line in the verses? Or are they just singing "she-bop she-bop" ? You decide.

Back in 1994 when reviewing Rhino Records' first Doo-Wop Box, Here's what I said about this song:

... one night last winter I was driving alone on a rainy night, listening, for reasons I don't remember, to an oldies station, which happened to play "I Only Have Eyes for You" by The Flamingos.

There's a strumming of three guitar chords, followed by the steady beat of a piano. Singer [Nate Nelson] comes in singing effortlessly, "My love must be a kind of blind love/I can't see anyone but you," as if he's got to justify what he has to say.

Then the group responds with unintelligible, almost discordant syllables, like some kind of eerie voodoo chant. All this before Hunt starts the first verse, invoking celestial bodies.

By the end of the song, all five Flamingos are gushing the beautiful melody, the falsetto going nuts as if possessed by the loa of high register. It almost seems that the group is having the aural equivalent of a simultaneous orgasm, right there in the echo chamber.

But way before the song got to this point on that rainy Santa Fe night, I was transported into the past, reliving a buried memory of being a 5-year-old kid, listening to a radio late at night to a sound that was alluring and forbidding at the same time ...

The official Flamingos web site describes how the arrangement for this song came to be:

[Singer and guitarist Terry Johnson] lamented to Nate Nelson about what to do with the song, to which Nate suggested incorporating the Russian anthem “Song of the Volga Boatmen.” Nate, whose nickname was “lips,” was known for his snide jokes and wry sense of humor. Terry disregarded the remark and went back to his room at the Cecil [a hotel in Harlem] to try to figure out an arrangement on his guitar. Laying in his bed with the guitar across his body, he fell asleep. “By the time I awoke,” Terry recalls, “God had given me the arrangement in a dream.” A few chords Terry had been strumming before he dosed off, a bass-line variation of the “Volga Boatmen” song and an ethereal vocal background idea came together quickly after Terry had woken his colleagues to muster for an impromptu rehearsal. The evolution of Terry’s arrangement of “I Only Have Eyes For You” was at first met with ridicule from the other Flamingos, then mild reluctance from the record label, but shortly after release, the record began to garner airplay in Philly. If any other recording by any other artist had been claimed to come from God, in a dream, the story would likely be quickly dismissed. Listening to The Flamingos’ version of “I Only Have Eyes For You,” its origin almost seems obvious.

As for the songwriters, "I Only Have Eyes for You" was written by the team of Harry Warren and Al Dubin, who are best known for Broadway show tunes. The two also are responsible for "Lullaby of Broadway" and “We’re In the Money.”

Warren also wrote “That’s Amore,”  “Chattanooga Choo Choo,”  “You Must Have Been a Beautiful Baby” (with Johnny Mercer) and, for television, “The Legend of Wyatt Earp.”

Dubin, back in the 1920s,wrote "Tiptoe Through the Tulips."

Wherever it came from, "I Only Have Eyes For You," as performed by The Flamingos still gives me the shivers.