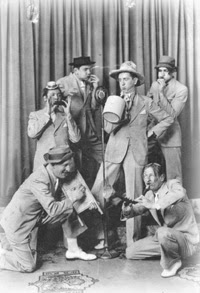 This week's Throwback Thursday goes back to 1942, when a funny little musical ensemble called The Schnickelfritz Band appeared in this wacky little clip I found when looking for something else on the old Youtube,

This is what you call your basic "soundie," which was the music video of the 1940s.

I think you'll recognize the tune.

So who are these Schnickelfritzers?

According to a column in The Winona Post up in Minnesota by a writer named Frances Edstrom, they were  the house band at a Winona joint called the Sugar Loaf Tavern, "near the intersection of Hwy. 43 and Homer Road in West Burns Valley."


Schnickelfritz was the moniker adopted by Freddie Fisher, a musician originally from Iowa. Freddie and his band, a forerunner of the Spike Jones type of entertainers, combining music with comedy routines, some rather irreverent ...

Schnickelfritz and the band worked with New York agents, had a recording contract with Decca Records, and were billed as "America's Most Unsophisticated Band!" and "Still the Biggest Novelty Recording Attraction."

After some time, Schnickelfritz and his band moved up to St. Paul, where they played at the Midway ...  It was in St. Paul that an agent of singing and movie star Rudy Vallee caught the Schnickelfritz show. He brought Rudy to see the band, and they signed Schnickelfritz to a contract for a movie.

The band appeared in several movies, as well as "soundies."

Fischer left Hollywood in the early '50s and moved to Aspen, Colorado, where, Edstrom said he "ran a novelty shop and played at the popular night club, the Red Onion."

OK, that was the fun part of this post. Stop reading now if you don't want your Thanksgiving to be free of controversy and poltiics. 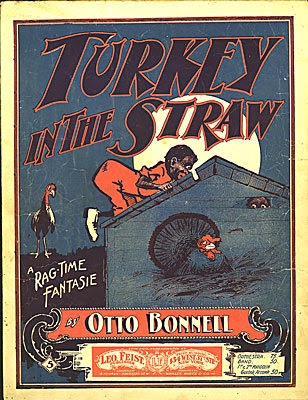 As for the song itself, it was a subject of controversy earlier this year when NPR did a story on its website about the minstrel show origins of the tune:

"There is simply no divorcing the song from the dozens of decades it was almost exclusively used for coming up with new ways to ridicule, and profit from, black people," writer Theodore R. Johnson wrote.

The story focuses on the use of the song by ice cream trucks. That's because a racist "coon song" in 1916 ("Nigger Loves His Watermelon" by Harry C. Browne, a popular purveyor of racist ditties in his day) refers to watermelon as the "colored man's ice cream."

The New Republic's John McWhorter responded to the NPR piece:

In pop culture of the early twentieth century, that tune is eternally associated with either its inoffensive, nonsensical lyrics or, when performed instrumentally, with farm animals and rural settings. For example, the man who scored Looney Tunes, Carl Stalling, used “Turkey in the Straw” constantly in scenes on farms and especially with chickens and the like. To grow up watching these cartoons was to have the tune hammered into one’s head, especially by Foghorn (“I say, that’s a joke, son!”) Leghorn.

So, what evidence supports the idea that in the 1920s, when these ice cream trucks became established, publicity executives were actually thinking of anti-“darky” doggerel when deciding what song the trucks would play?

I'm sure this fight will continue. But I'm pretty sure that The  Schnickelfritz Band wasn't thinking about racist stereotypes when they filmed their version of  the song.

Whatever, may there be no straw in your turkey today.
at November 27, 2014