TERRELL'S TUNEUP: New Ones from Dowd and Slackeye 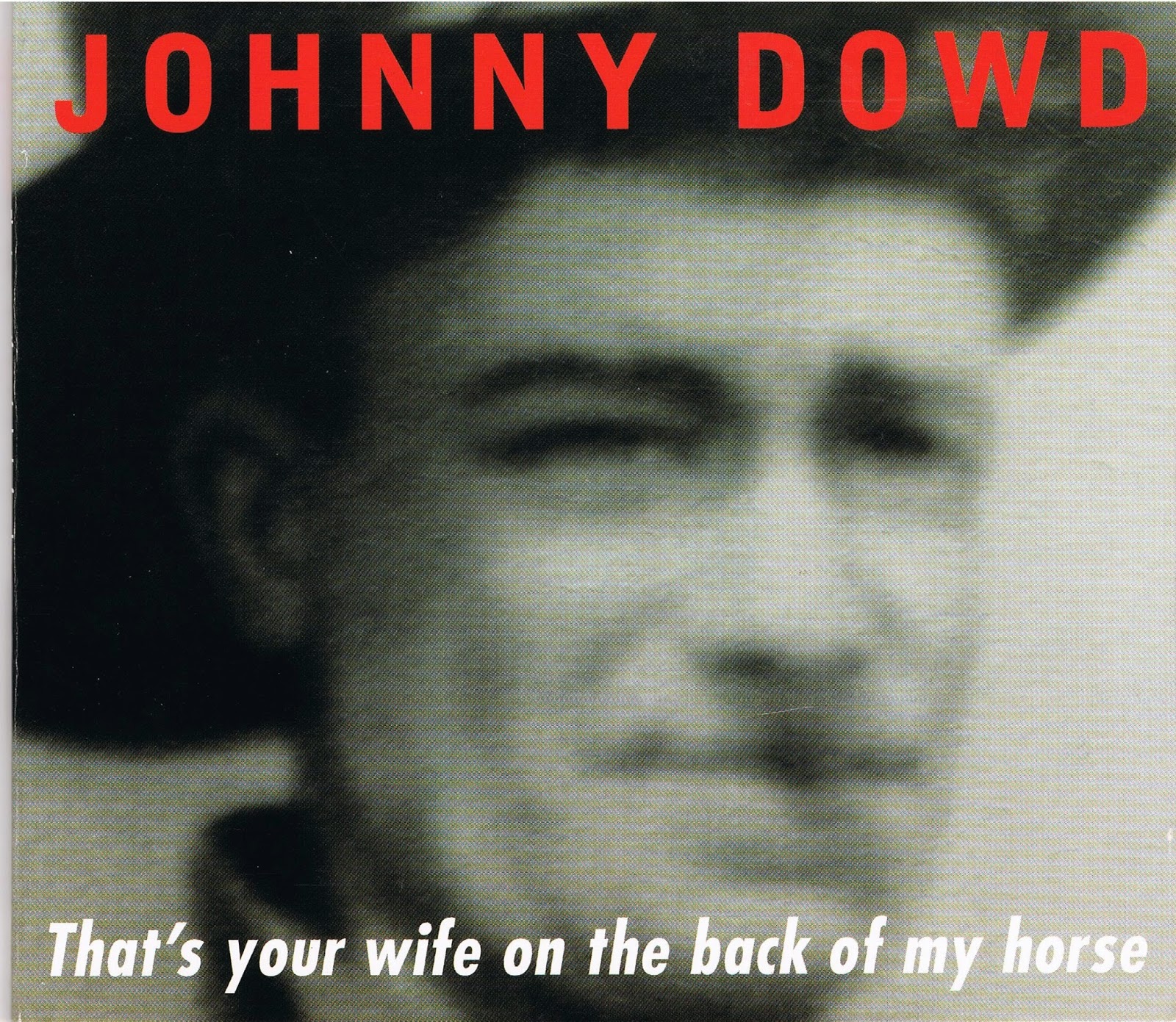 Johnny Dowd writes his songs like a sniper aims his gun. Sometimes his songs are like a captured serial killer’s confession. They’re full of regret, shame, venom, horrifying humor, and uncomfortable truths.

This time out, Dowd played virtually all the instruments himself — exceptions are vocal contributions from Anna Coogan, who sounds so much like Dowd’s old bandmate Kim Sherwood-Caso it’s spooky; a guitar solo on “Words Are Birds” from Mike Cook; and a brief appearance by Dowd’s regular band on the end of “Teardrops.”

Dowd himself has compared the record to his first one, Wrong Side of Memphis. That late-1990s album is also mostly just Dowd on a variety of instruments. But it is more acoustic and rootsy, based in country and blues. On this new one, the music behind the lyrics is crazier than ever: low-tech electronica; rasty, distorted guitar licks; insane beats from an ancient drum machine over Dowd’s growling drawl and Coogan’s angelic melodies. It’s “New Year’s Eve in the nuthouse,” as Archie Bunker would say.

This is followed by a funky, boastful rap, “White Dolemite,” a salute to the heroic persona of “party” record artist and blaxploitation star Rudy Ray Moore. “I live the life men dream about/Stand up, people, give me a shout,” Dowd declares, as Coogan responds, “Hot pants! He needs a spanking.”

On “The Devil Don’t Bother Me,” Dowd sounds like a death-row inmate contemplating theology while awaiting injection. “An angel on one shoulder and the devil on the other/Jesus, He’s my savior, but the devil is my brother.”

And that's just one of Dowd’s characters who seem like a coiled snake about to strike. On “Nasty Mouth,” Dowd’s narrator spews harsh judgment about a woman, who, I would guess, rejected him. “I’m just trying to forget the words that came out of your nasty mouth,” he spits over ambient blips and bleeps and a dangerous fuzz guitar.

Another favorite here include “Female Jesus,” which has a bluesy, swampy groove and is about a rural Okie prostitute who, Dowd says, “satisfied my body/She purified my brain/Then she called the undertaker and put my casket on a train.” Easily the album’s most melodic track, The song “Why?” sounds like a ’60s soul ballad left in the forest to be eaten by wolves, while the upbeat “Sunglasses” could have been a summertime pop hit … on the planet Neptune. (“Boys who wear sunglasses get laid,” Coogan informs us.)

At the end of the last song, “Teardrops,” a slow, dreamy (well, nightmarish) dirge about the fall of a powerful man (“In a world of little men, I walked like a giant/If I’d have been a lawyer, God would’ve been my client”), Dowd thanks his audience and an announcer says, “The ultrascary troubadour has left the building. With your wife. On the back of his horse.”

Left the building? Well, maybe. But I bet he actually just went to the dark alley behind the building. 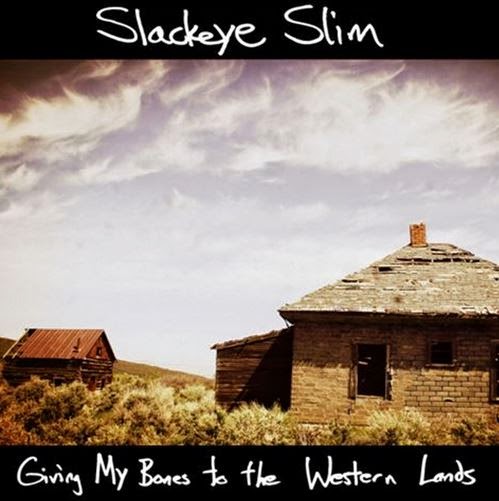 * Giving My Bones to the Western Lands by Slackeye Slim. Joe Frankland is another singer-songwriter who likes to explore the shadows, though his music is rooted in the country, folk, and spaghetti-western realms. Under the name Slackeye Slim, Frankland’s songs frequently are cast in an Old West setting, though his themes of sin, redemption, loneliness, desperation, and freedom are universal.

It’s been four years since his previous album, El Santo Grial: La Pistola Piadosa, which I compared to Willie Nelson’s Red Headed Stranger. Since then, he’s moved from Montana to a ranch near Mesa, Colorado. He says he recorded this album in “dilapidated buildings” as well as on his front porch, “as hundreds of cattle grazed quietly just a few yards away.”

The body count on Giving My Bones isn’t nearly as high as it was on El Santo Grial, even though the second song, “Don Houston,” is about a guy who, for no apparent reason, shoots a stranger in the face. “Every time he pulled the trigger, it was the most beautiful thing you ever saw,” the narrator explains. “It was an art. His brush was a bullet, his paint was blood, his canvas was the earth, the rocks, the trees, and the dirt.”

Don Houston and El Santo Grial’s antihero, Drake Savage, would have a lot to talk about. Assuming they didn’t kill each other first. 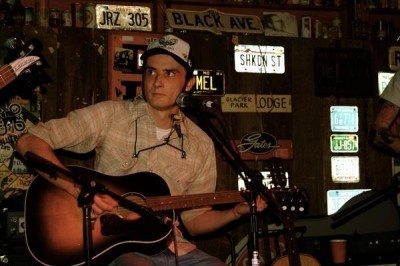 But not every song on the new Slackeye album deals with crazy violence. One recurring theme here is psychological healing.

Take the sadly beautiful “I’m Going Home.” (I’ll be extremely surprised if anyone comes up with a prettier song than this one this year — or in the next decade.) Accompanied only by a banjo, a harmonica, and his stomping foot, Slackeye’s foghorn voice is perfectly suited to this tale of a lonesome journey to the nadir of his life. Riffing on lines from the old song “Hesitation Blues,” he sings, “Whiskey was the river and me, I was the duck/I lived down at the bottom and I could not get up/At first I thought I’d found it, a place where I belonged/But I had no home.”

Then, on “Cowboy Song” — a herky-jerky waltz that, with a few Balkan embellishments, could almost be a Beirut song — riding the range is the prescription that rebuilds a broken soul: “A man alone in the wilderness/That’s where his soul is born/As long as he’s singing his cowboy song.”

You can listen to and/or name your own buying price for Giving My Bones to the Western Lands at www.slackeyeslim.bandcamp.com. But even though you can snag it for free, pay him something. Don’t be a jerk!

And here's a song called "Cadillac Hearse" from that album