One of the many contributions of Dr. Demento is his rescuing a comic singer called Benny Bell from the dustbin of history. 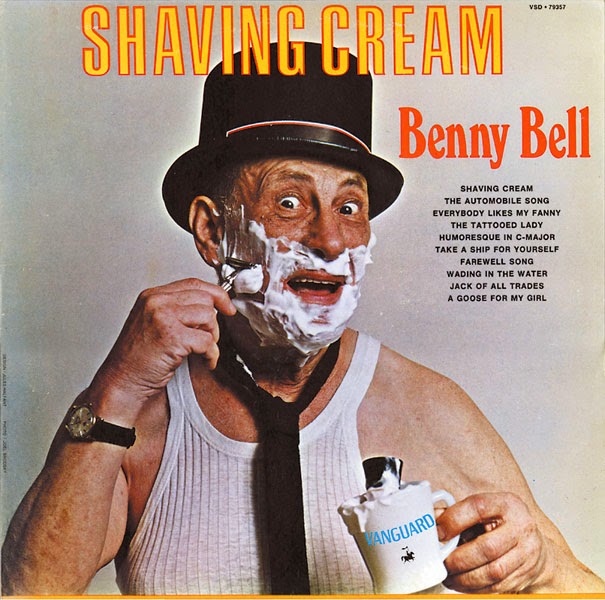 Thanks to the good doctor, who frequently played "Shaving Cream," recorded in 1946, and to a lesser extent oter songs like "Everybody Loves My Fanny," Benny Bell won a whole new generation of fans.

I don't care how many times I've heard it, these lyrics always bring a chuckle:

"I have a sad story to tell you
It may hurt your feelings a bit
Last night when I walked into my bathroom
I stepped in a big pile of ...
Shhhhh . . . aving cream
Be nice and clean.
Shave every day and you'll always look keen."

For those not familiar with Bell's biggest hit, (which actually was sung not by Bell, but by a vocalist named Phil Winston aka Paul Wynn) take a listen:

Bell, born Benjamin Zamburg in 1906, (and died in 1999) was a pioneer in Jewish American comedy records.

According to his biography at the Judaica Sound Archives, (a massive collection of Jewish music) which is part of Florida Atlantic University:

Like so many others of his day who lived on Manhattan’s Lower East Side, Benny Bell’s first language was Yiddish. He was drawn to the world of entertainment from an early age, already writing song lyrics and music as a teenager. The lure of show business beckoned and before long he was performing on the Vaudeville stage as Benny Bimbo. A natural comedian, Benny Bell enjoyed nothing more than making people laugh.

Starting his own record company in the 1930’s, he became a pioneer in the field of Yiddish comedy phonograph recordings. He produced a series of party records using different names, e.g. Paul Wynn, and which were considered risqué at the time, but are really quite mild by today’s standards.

The Internet Archive has collected 31 old Benny Bell recordings. Most are from old scratchy 78s in the '40s, though some like "A Goose for My Girl," "Farewell Song" and "Turtle Song," as late as the '70s. Download any or all of these HERE or listen below.

When you listen to Track 4,  "Dopey John," go back and read my exploration of  the song "Cabbage Head" on this blog. (CLICK HERE)

And as a special bonus, here's a version of "Shaving Cream" by none other than Dave Van Rock