THROWBACK THURSDAY: Brennan on the Moor 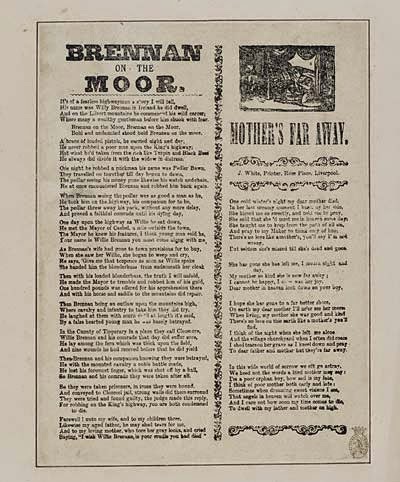 Faith and begorrah and  Erin go braugh, it's only five days until St. Patrick's Day!

So here  is a look at one of my favorite Irish outlaw songs, the tale of a "brave young highwayman" named Willie Brennan.

Here is one version of the lyrics:

'Tis of a brave young highwayman this story we will tell,
His name was Willie Brennan and in Ireland he did dwell.
'Twas on the Kilworth Mountains he commenced his wild career,
And many a wealthy nobleman before him shook with fear.

One day upon the highway, as Willie he went down,
He met the mayor of Cashel, a mile outside of town.
The mayor, he knew his features, and he said, "Young man," said he,
"Your name is Willie Brennan, you must come along with me."
(Refrain)

Now Brennan's wife had gone to town provisions for to buy,
And when she saw her Willie she commenced to weep and cry.
Said, "Hand to me that ten-penny," as soon as Willie spoke,
She handed him a blunderbuss from underneath her cloak
(Refrain)

Now Brennan being an outlaw upon the mountains high,
With cavalry and infantry to take him they did try.
He laughed at them with scorn until at last 'twas said
By a false-hearted woman he was cruelly betrayed,
(Refrain)

Although others, notably Burl Ives, had recorded it before, it's Tommy Makem & The Clancy Brothers' version from the early 1960s that introduced me to the song.

According to The Penguin Book of English Folk Songs,  (edited by Ralph Vaughan Williams and A.L.Lloyd in 1959):

"This song was widely sung in the Victorian era ... William Brennan really did exist, and was one of the most famous Irish criminals of the period. It is not easy to get authoritative information about him , mainly because legend quickly obscured fact, and even his date of death is not known for sure; 1804 is most cited, but there are other references to 1809, and even 1812, and while most sources claim that he was taken by authorities and formally executed, there is also a tradition that he was killed by one of his potential victims in a highway robbery which went wrong."

The Penguin book notes that like most outlaw ballads, this song turns Willie Brennan into a Robin Hood-like character, "And many a wealthy nobleman before him shook with fear ..."

Basically it was the gangsta rap of its day.

In his cool website ... Just Another Song, folklorist Jürgen Kloss, in writing about "Brennan on the Moor" notes that 18th Century lawyer John Edward Walsh  in 1747 claimed that the children's "integrity and sense of right and wrong was confounded, by proposing the actions of lawless felons as the objects of interest and imitation."

So, for the love of God, keep this vile song away from the children!

It should be noted that in some versions, Willie's own mother denounces him for his outlaw ways: "Oh, would to God that Willie had within his cradle died.'" (In some, it's his father who makes this declaration.)

And in some versions, "modern" ones Kloss says, the ghost of Willie still rides: "They see him with his blunderbuss, all in the midnight chill."

A young Bob Dylan dug The Clancys' take on "Brennan on the Moor.

In the liner notes of Dylan;s first Bootleg Series, John Bauldie wrote: "Dylan heard them sing the song in New York and loved it immediately. He told film director Derek Bailey in 1984: `I'd never heard those kind of songs before...all the legendary people they used to sing about - Brennan on the Moor or Roddy Macaulay...I would think of Brennan on the Moor the same way as I would think of Jesse James or something. You know, I wrote some of my own songs to some of the melodies that I heard them do...' "

And a website called Bob Dylan's Musical Roots quotes Liam Clancy: "I met the young Dylan on 4th St. in the Village one morning as I was rushing to rehearsal. 'Hey Liam, hey man. I wrote a song to the tune of `Brennan on the Moor' last night. Wanta hear it man?, only 15 verses man, wanna hear it'."