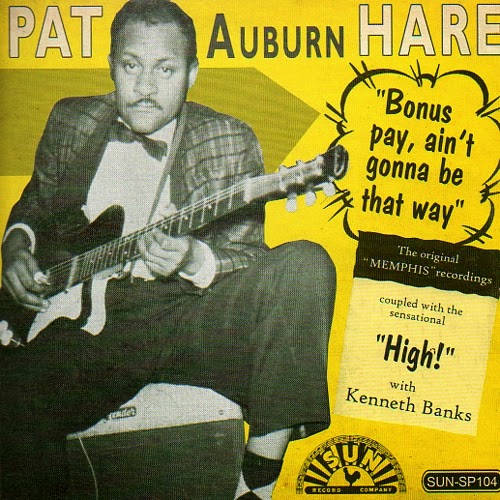 And his playing was unforgettable.

Nick Tosches, in his book Where Dead Voices Gather, described Hare's style as "black-magic electric-guitar conjurings through overamplified distortion [that] foreshadowed those of Hendrix ..." Cub Koda, in the Allmusic Guide, called Hare's playing as "highly distorted guitar played with a ton of aggression and just barely suppressed violence ..."

Though he never got famous, Hare undoubtedly would be a darling of the blues scholars and rabid early rock 'n' roll zealots because of his musicianship.

Unfortunately, he's better known for something that had nothing to do with his guitar playing.

On Dec. 15, 1963, after a day of drinking, Hare at the time was living in Minneapolis with a married woman named Aggie Winje, who, Hare told a friend, was thinking of moving back with her husband. After spending sometime fighting with Aggie, Hare told a neighbor "That woman is going to make me kill her." Another neighbor called police after hearing shots fired. Two officers responded. And one of them was shot to death by Hare. Aggie had been shot also.

The other officer pumped some lead into Hare, but he survived. Aggie  hung on for nearly a month, but died Jan. 22, 1964.

According to music journalist James "The Hound" Marshall in his detailed account on an excellent site called The Houndblog: "When questioned, Hare remembered only that he was drunk and claimed to have no recollection of shooting anyone."

But to add the ultimate twist to this squalid little tale, nearly a decade before, at Sun Studios in Memphis, Hare recorded a jolly little ditty called "I'm Gonna Murder My Baby."

In May of '54, Sam Phillips decided to record Pat Hare under his own name. James Cotton was scheduled to play harmonica on the session but the two got into a fist fight that day, and Cotton disappeared. Instead, Hare is backed up by Israel Franklin on bass and Billy Love on piano on the two tunes.  The first is a monstrous reading of Dr. Clayton's "Cheatin' & Lyin' Blues," re-titled on the tape box "I'm Gonna Murder My Baby," it was and still is, one of the most foreboding and ominous recordings in the entire blues canon ... Phillips chose not to release Hare's disc which would not be heard until it slipped out on a bootleg on the Redita label in 1976, and later appeared on Charley Records' Sun Blues Box in the eighties.

Hare was convicted of murdering his baby and the cop who came to help. He died of lung cancer in prison in 1980.

He's still a resident of Rock 'n' Roll Hell, where he's currently in a band with these guys ...

This post goes out to my old friend, Mark, who knew more about Pat Hare than I dd.