THROWBACK THURSDAY: Springtime in the Rockies 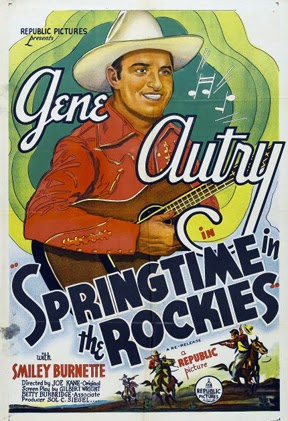 Tomorrow, Friday March 20, is the first day of Spring.

So in celebration of the changing of the season, here are three of my favorite songs about spring.

First, Gene Autry, performing the title song -- or close to it-- of one of his classic singing cowboy movies, Springtime in the Rockies, which was released in 1937.

Five years later, Betty Grable made a movie with the same title.

The ballad became a hit single for Gene Autry, and later for country singer Hank Snow. The nostalgic words set to their simple melody suggest that this is an old folk song, its words polished by countless anonymous singers. But it is a 20th century creation, its lyrics written by a Mormon girl, Mary Hale Woolsey, born in Springville, Utah, in 1899.

Mary attended Provo High School, then Brigham Young University where she served as a class officer and wrote for student publications. With a keen ear for the spoken word, Mary wrote several operettas performed by local theater and church groups and found a ready market for her radio plays.

She successfully collaborated with professional musicians. “Springtime in the Rockies” was published in 1929 with music written by Robert Sauer and was followed by other songs in the sentimental western genre – “When the Wild, Wild Roses Bloom,” “Colorado Skies,” and “On the Trails of Timpanogas” were all popular for a time.

So there is our history lesson for the day. Here are two other spring favorites:

Here is Bobby Troup, the guy who wrote "(Get Your Kicks On) Route 66."

But I first heard "Their Hearts Were Full of Spring" by The Beach Boys, who based their version on that of The Four Freshmen. Here is a downright haunting live rendition from sometime in the '80s:

Finally, here's Elvis and some pals with "Spring Fever" from his motion picture classic from 50 years ago, Girl Happy.