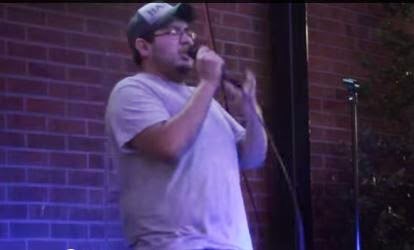 Before we begin, let me admit something:

I'm very thankful that nobody was recording me that fateful night about 15 years ago when I basically cleared out an after-hours party at a downtown Albuquerque bar with my karaoke rendition of "You're the Reason God Made Oklahoma."

So I have some sympathy for the poor folks who basically are the butts of the joke in all these videos.

That being said, I think these are hilarious.

When I first heard this song sung by Dolly Parton on a car radio in the 70s, I was so awestruck, I almost drove my car off the road. When I heard this, I wanted to drive my car at a high speed toward the singer.

I wouldn't want to hear much more of Amy, but she's got personality

This guy isn't as cute or funny as Amy, but that's o.k. He sings even worse.

I have to admit, I don't think I'd sing very well either if I was suspended over a tank full of frogs and water snakes. This apparently is some kind of weird game show in Thailand.

Go ahead try this at home!