A version of this was published in The Santa Fe New Mexican
April 10, 2015 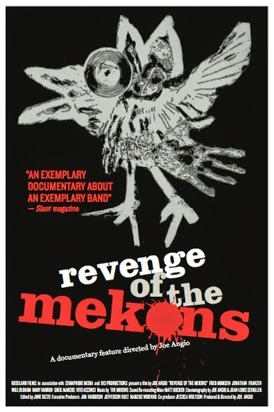 Ed Roche, the former head of Touch and Go Records, summed up the appeal of the longest surviving punk band in the world: “The joke around the label is that every critic loves The Mekons. Unfortunately, they get free records.”

Roche made those remarks in the documentary Revenge of The Mekons, which is playing at the Center for Contemporary Arts in Santa Fe next week. And the underlying truth of Roche’s joke can be seen at the Metacritic page for the movie. There are 10 reviews of critics listed (and only one bad review). And no “users” (non-professional critic) reviews.

Devout Mekons fans probably will become devout fans of this movie, directed by Joe Angio, (whose previous film was a documentary about  actor/director Melvin Van Peebles called How to Eat Your Watermelon in White Company (And Enjoy It).)

Revenge tells the story of how The Mekons came together as students in Leeds in 1977 and how they’ve they’ve kept going through the years -- with an amazingly stable roster for the last 20 or 25 years -- remaining true to their vision and consistently producing inspiring work.

“We were a bunch of art students when we formed, and it was an at project bascaly,” singer/guitarist Jon Langford says on camera. “We weren’t musicians. We were just seeing how far we could take it.” 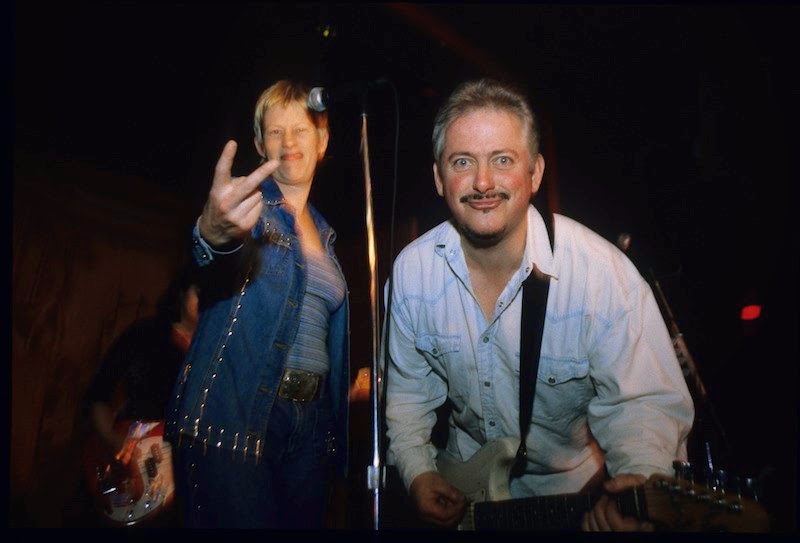 As faithful readers of this column can attest, I’m one of those critics who loves the damned Mekons. I’ve seen them live twice (both during South by Southwest festivals in Austin) and I think I’ve reviewed every album the band has released in the past 20 years, plus many of the offshoot projects like The Waco Brothers and various Langford and Sally Timms solo records.

And it never fails to frustrate me that no matter how I’ve tried to spread the word about this wonderful musical collective of visionaries, rebels and oddballs – and how writers far more talented and influential than I have tried to do the same -- The Mekons’ audience never seems to rise beyond the level of small-but-rabid cult.

In an interview at a Minnesota radio station shown in the film, the host notes the longevity of the group – their first incarnation was in 1977 – and asks the band, “What’s the key to your success?” Members look around at each other, grinning, possibly suppressing laughter.

Singer Timms, a Mekon since the mid 80s, answers: “Success is the thing that usually kills bands in the end. So we haven’t had any success. We’ve had none of the attendant problems. It’s easier than fighting over huge sums of money. We fight over $10 or $15.”

So what’s the key to their lack of success? Probably it’s because of the band’s uncompromising nature – and their precarious relationship with the music industry.

Kevin Lycett, a founding Mekon who was with the band until 1989, summed it up in the movie while talking about their brief association with Virgin Records, which released their first album:

Likewise, longtime Mekons drummer Steve Goulding says, “I don’t think it’s anti-capitalist so much as just having an ideal that you want to stay with … It’s not really a political stance. It’s an artistic stance.”

Fans will appreciate these interviews with various members past and present. Listing to Langford and the equally witty Timms talk is always a pleasure. But I came away with new appreciation for Susie Honeyman, the band’s fiddler for more than 30 years, whose day job is running a London art gallery with her husband. Honeyman talks about how she was terrified of Timms at first (“… she was extremely rude and vicious. She’s toned down the viciousness.”)

And while other Mekons laugh off their bad luck in the music biz, Honeyman tells a story of attending a party thrown by A&M Records, the band’s label for a couple of albums in the late ‘80s. The new management was announcing all the artists signed with the label but didn’t mention The Mekons. The group knew their time with A&M was over and you can see the heartbreak in Honeyman’s eyes.

Also excellent is the live footage of The Mekons on stage through the decades including some extremely rare clips of early shows. You’ll see Timms forgetting the lyrics to “Ghosts of American Astronauts” and Langford doing a hilariously obnoxious rock-star dance as the rest of the band sits in an “unplugged” set.

So go see Revenge of The Mekons. And bring a friend or two to try to expand the cult just a little.

There will be a sneak preview of Revenge of The Mekons at the Center for Contemporary Arts at 6:30pm  Thursday, April 16 at 6:30pm, followed by a Skype Q&A with Langford. Regular showings begin Friday, April 17.

Canutofest!  Friends and family of the late Kenny “Canuto” Delgado are organizing a fitting tribute to the man that many have described as Santa Fe’s number one music fan. Delgado died last Thanksgiving  after struggling many years with cardiac problems.

Delgado was a longtime member of the Santa Fe Bandstand Committee, which is responsible for the free music program on the Plaza every summer. And was a constant presence at concerts from rock 'n' roll to mariachi.

There is no charge, but those attending are asked to bring supplies for the Santa Fe Animal Shelter – high end dog and cat food (the shelter refers Purina), non-clumping kitty litter etc.

Video treats: Here's a whole lotta Mekons, starting with the trailer for Revenge of The Mekons


I'm not sure why, but since watching Revenge of The Mekons, "Beaten and Broken" has become my favorite Mekons song. Here's a version from last summer with Robbie Fulks. (Unfortunately the sound isn't great but the performance is great fun. I'm not sure what cracked up Sally and the others. Maybe it was Lu's strange saz solo.