A version of this was published in The Santa Fe New Mexican
May 22, 2015 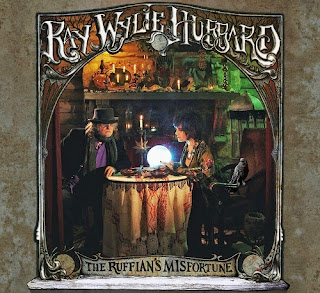 Ray Wylie Hubbard’s Twitter feed (@raywylie) isn’t anywhere as essential as his music, but it’s often pretty entertaining. Early in May, after some ticket agency apparently had referred to him as a “country” singer, Hubbard tweeted, “i ain’t country..use ‘cool ol low down dead thumb groove badass folkie halfass blues poet with a young rockin band’ instead.”

That tweet could be read as a darn good self-evaluation of his latest record, The Ruffian’s Misfortune. Once again, Hubbard has given the world a swampy, blues-soaked collection of tunes in which, in his trademark Okie drawl, he tells stories of sin and salvation; gods and devils; women who light candles to the “Black Madonna;” undertakers who look like crows (“red-eyed and dressed in black”); and hot-wiring cars in Oklahoma.

And I wasn’t kidding about “essential.” Somehow in the last decade or so, Hubbard has clawed his way from being an interesting survivor of the early-’70s-Texas-cosmic-cowboy scene to one of the most important unsung songwriters in the music biz today. And I don’t say that lightly. Last time I reviewed one of Ray Wylie’s albums, I said, “Hubbard’s albums of the last 10 years are even more consistently brilliant than Tom Waits’ output since the turn of the century.”

That’s still true. And Ray Wylie is more prolific than Waits, too.

He’s using the same basic band he’s used on his last few albums, including his son Lucas Hubbard on guitar, George Reiff on bass, and Rick Richards on drums. Together they’ve crafted a distinctive sound, and, like Hubbard himself, they keep getting better.

Hubbard grabs you by the throat immediately in “All Loose Things,” the first song on The Ruffian’s Misfortune. Raw guitar chords explode over a harsh drum beat. Then Hubbard begins to sing, though he’s giving voice to a blackbird looking down on pitiful humans: “Storm is comin’, rain’s about. To fall/Ain’t no shelter ’round here for these children at all. ... Now the dirt is splatterin’ it’s turning into mud/Erasing all traces of broken bones and blood/All loose things end up being washed away.”

Listening to Hubbard, you might start to get the feeling that, like some grizzled oracle, he’s gently imparting secrets of the universe. At the start of the song “Hey, Mama, My Time Ain’t Long,” he sings matter-of-factly, “Now children let me tell you about the songs a bluesman sings/Comes from a woman’s moans and the squeak of guitar strings/Some say it’s the devil jingling the coins in his pocket/I say it sounds more like a pistol when you cock it.”

Hubbard name-checks some of his rock ’n’ roll forbearers — the Rolling Stones, the Allman Brothers, Billy Gibbons of ZZ Top – in “Bad on Fords,” a song he co-wrote with country star Ronnie Dunn -- and previously recorded by Sammy Hagar.

He’s trying to convince some “pretty thing” to go on some crazy joyride from Abilene to L.A. “We’ll stop at The Sands in Vegas and bet it all on black 29,” he sings.

The song “Down by The River” is a frenzied tune that might remind you of James McMurtry’s “Choctaw Bingo.” Hubbard’s tune is about a bunch of El Paso kids crossing the Santa Fe Bridge into Juárez to “sip a little poison.” Violence lurks everywhere – gunfire, bloodstains, those crowlike undertakers burying bodies down by the river.

He’s basically describing a real-life hell in that song. But in a later song, “Barefoot in Heaven,” Hubbard sings of the other place, “where there ain’t no end of days.” The groove is similar to some long-lost Pops Staples tune. But the lyrics speak of another gospel titan: “When I get to Heaven, all the preachers tell me, I get a halo, some wings and a harp/That’s well and good, but what I want to hear is Sister Rosetta Tharpe.”

Two of the songs here are named for Hubbard’s blues heroes. “Mr. Musselwhite’s Blues” tells the story of harmonica shaman Charlie Musselwhite and how he was born in Mississippi and moved to Chicago, where Little Walter himself bestowed a harp on him. Musselwhite even gets some advice for the lovelorn from Big Joe Williams. “Big Joe said, ‘I’ve seen that woman, and Charlie, you’re better off with the blues.”

Then there’s “Jessie Mae,” a slow groover about the late Ms. Hemphill. “Every time you sing, black angels dance,” Hubbard sings. Praising her guitar style, he notes Hemphill had that “dead thumb groove” he admires, “like hammerin’ nails/On the low E string.”

Undoubtedly there’s a little bit of Jessie Mae Hemphill in the singer with the “short dress, torn stockings” who is subject of “Chick Singer, Badass Rocking.” Hubbard probably sounds a little lecherous here, but even if that’s so, it’s far outweighed by the sheer admiration he has for this unnamed belter, carrying on a sacred American tradition at her midnight gig at some dive.

Hubbard wouldn’t look that great in a short skirt and torn stockings, but he’s carrying on a noble tradition himself.


Check out these videos:

Here's one with an authentic chick singer/badass rocker

And here's another song from The Ruffian's Misfortune, performed with the co-writer Jonathan Tyler.

And making his debut on The Stephen W. Terrell (Music) Blog, I give you Mr. Sammy Hagar


Correction: The earlier version of this incorrectly called my favorite James McMurtry song as "Cherokee Bingo." The real title is "Choctaw Bingo." Sorry, wrong tribe. It's been corrected in the text.
at May 22, 2015