A version of this was published in The Santa Fe New Mexican
June 5, 2015 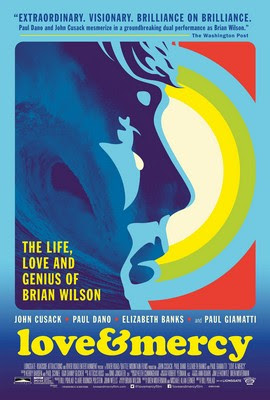 “A choke of grief heart hardened I/Beyond belief a broken man too tough to cry.”

Those lines, from Brian Wilson’s greatest song, “Surf’s Up,” sum up a good portion of the new biopic Love and Mercy. I don’t know whether Wilson’s lyricist Van Dyke Parks was consciously describing Wilson’s emotional state when he was collaborating with him on the songs for the album Smile in the mid-’60s, but the words fit.

And indeed, it’s a broken man at the center of Love and Mercy. Wilson, portrayed by Paul Dano (’60s Brian) and John Cusack (’80s Brian) is psychologically shattered despite his popularity, wealth, and accomplishments.

In the two main periods covered by this movie, Wilson is seen as the victim of loathsome bullies. First, there his father, Murray, who physically beat and psychologically abused him (“It’s not a love song, it’s a suicide note,” he growls when Brian plays him an early version of “God Only Knows.”).

And then there’s Wilson’s cousin and bandmate Mike Love, one of the most annoying jerks in the history of rock ’n’ roll, who fought, criticized, and humiliated Wilson at every turn during his most creative period, the Pet Sounds and Smile years. “It’s not Beach Boys fun!” he snaps at Wilson during the Pet Sounds sessions. “Even the happy songs are sad.”

But the most intense and fearsome bully in Wilson’s life is Dr. Eugene Landy (played magnificently by Paul Giamatti). He was hired as a psychotherapist to help Wilson overcome his addictions, but turned into a virtual captor who overmedicated him and ripped him off financially. “I have it under control,” he says to Wilson’s girlfriend Melinda. “I am the control.”

With all these villains here, there has to be a hero, and that’s Melinda Ledbetter, played by Elizabeth Banks. A former model who meets Wilson when she’s working as a Cadillac saleswoman, Melinda is not a fraction as forceful as Landy. And as hard as she tries, she’s unable to make Wilson stand up for himself.

But her compassion and her determination eventually succeed. (In real life, she and Wilson married in 1995, several years after Landy was vanquished.)

Speaking of real life, I’m not sure how close the movie is to actual events. The film was made with the cooperation of Wilson. (He appears in the closing credits, singing the title song.) So it’s bound to be the version of events that he wants to tell – even though he doesn’t come out looking so gallant. I don’t think anyone would deny that Wilson was as helpless and befuddled as he appears in the film.

But was Landy really as deplorable as Giamatti makes him? Was Ledbetter really as angelic?

For a 50-plus-year Beach Boys fan like myself, the best scenes are the ones in which Wilson is in the studio recording tracks for Pet Sounds and the ill-fated original Smile with that tight-knit gaggle of studio cats nicknamed the Wrecking Crew. Dano portrays Wilson as wide-eyed and on fire with crazy ideas, much of which worked.

You see the infamous scene in which Wilson makes all the studio musicians wear firemen’s helmets while recording a track about fire. You see Wilson putting bobby pins on piano strings to get a crazy sound. And there are Wilson’s dogs in the studio barking for the final fade-out of “Caroline No.” (“Hey Chuck, do you think we could get a horse in here?” Wilson asks an engineer.)

One of my favorite elements of this movie are the lush, eerie sound collages representing the music, and sometimes the demons, in Brian’s head. Recognizable snippets of Wilson/Beach Boys music rise and fall back into the swirling vortex of sound. I had to check the credits to make sure it wasn’t Animal Collective on the soundtrack, a Wilson-influenced group if ever there was one.

It’s not. The man responsible is Atticus Ross, who has won awards including an Oscar and a Grammy for his soundtracks for The Social Network and The Girl With the Dragon Tattoo, respectively. These strange sonic montages – sometimes sweet and heavenly, sometimes dark and tormenting – are essential to the story. The nonstop crazy symphony in Wilson’s head seems to be the source of his greatest works, though it often sounds like a direct and terrifying reflection of his inner turmoil.

I’m not sure how much Love and Mercy will appeal to those who don’t know or don’t care about Wilson’s music. (And believe it or not, there are people like that who walk the Earth.) But for those of us who have known and loved the Brian Wilson songbook, it’s a must-see.

New Mexico side trip: They aren’t mentioned in Love and Mercy, but there are a couple of obscure New Mexico connections in the Wilson/Landy saga.

That book painted an ugly portrait of the other band members and made Landy look as heroic as he appears villainous in Love and Mercy. (Wilson has since said he skimmed a draft of that book and did none of the writing.)

The plaintiffs also filed a virtually identical suit in New Hampshire. Wilson’s court-appointed conservator at the time, Jerome S. Billet, told me in 1994 that those were the only states that allowed suits to be filed three years after the alleged defamation.

But no Beach Boy ever had to appear in a Santa Fe courtroom. According to court records, a year later, Wilson was quietly dismissed as a defendant. The case was dismissed in early 1999.

After Landy lost his license to practice psychology in California, he still retained his license in two states: Hawaii and – you guessed it – New Mexico.

I don’t know how active he was here, but state records show he was licensed here between 1981 and his death in 2006. He’d had his license renewed in the state the year before. There are no violations or discipline reports on his record here.

Here is the official trailer:

Here is a frightening profile on ABC's Prime Time Live in 1991 when Wilson was still being "treated" by Landy.


And here is one of the most moving versions of the title song I've ever heard.