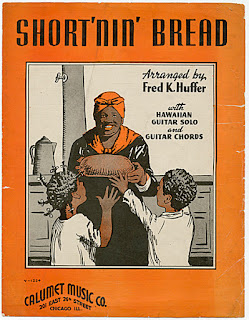 Did a happy, snappy American standard start out as a song about malnutrition among rural African Americans?

I'm talking about "Shortnin' Bread," that favorite of Mammy's little baby, about a tasty treat with strange medicinal power that can heal the sick and the half dead. This tune has been sung and recorded by some of the country's best known musicians, black and white, representing a number of styles and genres.

In her blog Pancocojams, dedicated to "the music, dances, and customs of African Americans and of other people of Black descent throughout the world," Azizi Powell writes.

In contemporary versions of this song, the first verse is given as "two little boys/laying in bed/one was sick/and the other almost dead". The reason why the boys were in those conditions was because they were suffering from malnutrition because of the inadequate food rations that enslaved families were given.

Even so, throughout the song's history, "Shortnin' Bread" has been played as a happy good-time tune -- often as a children's song. That's a frequent thread in blues, hillbilly music and other types of songs sung by poor people in this country -- finding humor and ultimately hope in terrible situations.

Some argue that "Shortnin' Bread" is a true folk song, coming from slaves on southern plantations or their immediate descendants. But some say it could have come from the minstrel shows, in which white performers parodied blacks. (Check out this discussion over at Mudcat.org)

Apparently the first known written version of the song was a poem, published in 1900, by James Whitcomb Riley, written in black dialect.

Nowhere in the poem is anything about those two little children lyin' in bed, or the doctor who prescribes shortnin' bread for them. While Riley took credit for the poem, it's possible that he based the various (seemingly unrelated) verses on songs or stories he heard from folk sources (i.e. plantation workers and the descendants of slaves).

Powell points out that several folklorists, beginning in the 1920s, documented versions of "Shortnin' Bread" -- who do have the familiar elements of the ailing children and the doctor.

In 1924 country singer Henry Whitter recorded a harmonica-led instrumental medley of "Hop Out Ladies & Shortenin' Bread." Gid Tanner & His Skillet Lickers recorded it -- including lyrics -- a couple of years later. Both J.E. Mainer, a proto-bluegrass artist, and Sonny Terry did versions in which the Jew's harp was prominent.

Mississippi John Hurt didn't actually record it until the early '60s, but his timeless style sounds like it could have been recorded decades before.

The song made it's way into the city. Paul Robeson lent his baritone to it in 1933.  Nelson Eddy sang it in the 1937 film Maytime.

And Fats Waller had a lot of fun with it in 1941. (Powell points out that Waller sang about two "Senegambians" lyin' in bed. That's a reference to a region in West Africa, though Waller seems to be using the word to describe African Americans in general.)

The Andrews Sisters also sang it in the '40s.

The song found new life in the 1950s. Dave Brubeck did a drum-heavy jazz version called "Short'nin' Bread Gone With The Wind" in 1959. And there was a new audience in R&B and rock 'n' roll. The song mutated into "Shortnin' Bread Rock," which sounds heavily influenced by Big Joe Turner.  Etta James did a rocking version, as did Tony Crombie & His Rockets, who recorded it in 1956. But it's tough to match the crazy energy of The Collins kids, who sang it on this TV appearance, introduced by country great Tex Ritter.

Several early '60s "garage" bands recording the song in the early '60s. Paul Chaplain & The Emeralds recorded it in 1960. There also were fine rocking renditions by The Bell Notes, Johnny & The Uncalled Four. But my favorite of this style was the ferocious version by The Readymen. Their wild arrangement appears to have inspired the cover by The Cramps on their Stay Sick album.

There was a do-wop version in 1962 by a group called The Blisters.

And a tasty '60s soul version by Lee Dorsey

And in the early '90s The Residents found every ounce of weirdness in the tune and, as they love to do, turned it into something bizarre and nearly unrecognizable.