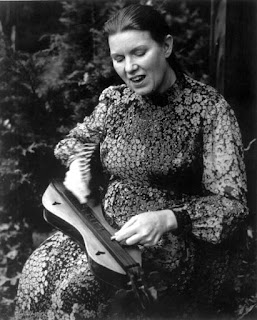 Jean Ritchie, an important figure in the New York folk revival -- and one of the sweetest voices ever captured on tape --  died Monday at the age of  92.

She one of 14 children in her family in Viper, Kentucky. Her dad let her play his dulcimer when she was seven years old. Now she's credited with reviving interest in that instrument.

Yes, Ritchie was a Kentucky farm girl. But she was no rustic bumpkin. She graduated from the University of Kentucky in 1946 with a degree in social work. She moved to New York City in the late '40s to work at  at the Henry Street Settlement on the Lower East Side.

There, according to her obituary in the New York Times, "she routinely calmed the urban street children in her care with songs from the Cumberlands, which, with their haunting modal melodies and tales of simple pastimes, were so alien as to stun her young charges."

She became a regular on the Greenwich Village coffee house scene, did radio appearances with Oscar Brown and eventually was recorded by Alan Lomax for the Library of Congress.

Here's an appreciation by fellow Kentuckian Walter Tunis, a music writer for the Lexington Herald-Leader.

I've put together a Spotify playlist featuring about 35 minutes of her music.