When you think about Woody Guthrie you probably think about his Dustbowl ballads, his labor songs, or maybe his best-known song, "This Land is Your Land."

Chances are you don't immediate think of Woody's songs about venereal disease.

Yes, Woody Guthrie wrote songs about syphilis and gonorrhea with lines like:

Once young and once healthy and happy / Now a whirlpool of raving insane / Lost here in this wild V.D. city / Where nobody knows you by name. 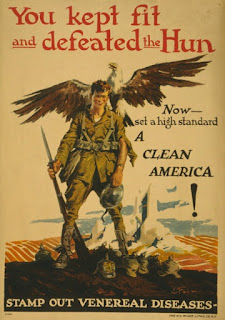 “With syphilis my cargo, I’ll dock in your harbor no more.”

In 1949 Alan Lomax, the great folk-song field collector, got Woody a job with  the U.S. Public Health Service writing such songs for an anti-VD radio campaign.

On one tune "VD Gunman's Blues," the singer fantasizes about shooting the woman who gave him the dose -- and her landlady too. I'll never understand why that one never became a hit.

Lots of politicians play "This Land is Your Land" at campaign rallies. But I promise to vote for the first one who uses Woody's "VD Avenue" in a campaign ad.

Several of these songs are included in the 2013 box  Woody Guthrie American Radical Patriot -- which also includes a 78 rpm record of Bob Dylan singing "VD City," which he recorded in the middle '60s.

When introducing "VD Guman's Blues," Woody remarks that if all the songs on the jukebox were about veneral disease, there wouldn't be so many cases of it.

Update: 10-10-15  Bad news. All of Woody's anti-VD songs have been pulled off Spotify, so that playlist that was embedded here is no more. Not sure of reason, but I assume it had something to do with copyright issues. (Have I told you lately how much I hate the music industry?) If just one person catches the clap because of these songs getting yanked, I'm blaming you, Spotify!

Anywho as a consolation prize, here's a version of Woody's "VD City" as performed by New Multitudes (Will Johnson, Jay Farrar, Yim Yames and Anders Parker)