UPDATE: July 2: Disappointing news. Tom Russell contacted me yesterday to tell me that he had to cancell Friday's SF Opry appearance because of a scheduling conflict. He did make a short recording, which I'll play on the show, but he won't be in the studio with me. 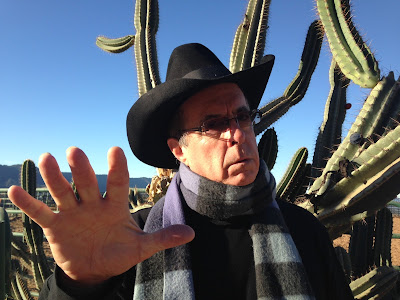 Singer-songwriter, artist-author Tom Russell, the man who wrote "Gallo de Cielo," "The Sky Above, The Mud Below," "Blue Wing," "Haley's Comet," "The Man From God Knows Where," "The Kid from Spavinaw," "When Sinatra Played Juarez" and way too many more to mention, will be appearing live in the studio on the Santa Fe Opry this Friday, July 3.

And he's got a gig on Tuesday July 14 at the Jean Cocteau Theater. (I'll be sure to ask him about those rumors I just started that he and George R.R. Martin are collaborating on a Game of Thrones episode about cockfighting in Westeros.)

So tune in Friday, 10 p.m. Mountain Time on KSFR. That's 101.1 in Santa Fe and Northern New Mexico and streaming live on the web at www.ksfr.org

Below is a promo video for The Rose of Roscrea.

And here is one of my favorite Russell tunes. That's Eliza Gilkyson on background vocals. (She's on Russell's new album too)