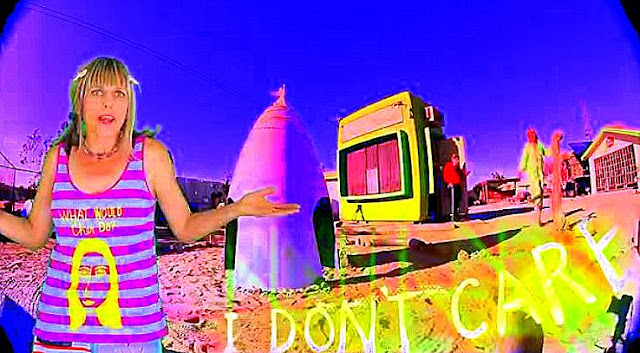 I get zillions of emails from musicians, but this recent one brought a big smile to my face.

And the email ended:

p.s. something good is gonna happen to Steve Terrell today!

It was from an iconoclastic musician, songwriter and artist from California I met a few years ago named Shari Elf. And no it wasn't really a personal email. It was a notice for her new album and video. But it was so Shari Elf, it brought a smile to an otherwise stressful day,

Did I mention a video?

I met Shari Elf back in November, 2009 at a private party at Burt's Tiki Lounge in Albuquerque. Stan Ridgway, The Handsome Family and Jill Sobule were doing one of those "Roots on the Rails" gigs in which a bunch of musicians travel by train with a group of paying fans. This group was traveling between Albuquerque and Los Angeles. The night before they left all the musicians did a private gig at Burt's.

I struck up a conversation with tall blonde woman sitting next to me, who turned out to be Shari. She was a passenger on this ride. She went because she's a huge fan of The Handsome Family..

Unrelated fact: Sitting next to me on the other side was none other than Julia Sweeney, formerly of Saturday night live. She's a friend of Sobule and flew to Albuquerque for the show. It was a night of celebrities!

Shari lives near Joshua Tree, Calif. where she operates the Art Queen gallery and studio -- which looks like a center of what some call "outsider' art as well as The World Famous Crochet Museum. It's housed in a former Photo Quick building (you use to see them in shopping center parking lots all the time back in the '70s), and is a showcase for Shari's vast, colorful garage-sale crochet collection,

Shari's sweet, childlike songs are a universe unto themselves. They remind me a lot of Daniel Johnston, who she's listed as a major influence.

Here is one of my favorites from the new album by Shari with her band, The Kittens.


But she's also good at what she calls "sharioke." Or should it be "Cherioke"?

Somethng good is gonna happen to you on Wacky Wednesday, Shari.