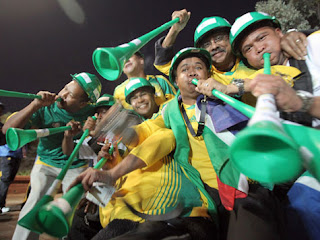 Last week a Facebook friend of mine posted the following on her page:

Anyone have a superloud playlist of jams for me to drown out this fucking ASSHOLE doing his homework loudly on Facetime?

I'm not sure where she was where a jerk using Facetime would bother her like that. But everybody can relate to the being bugged so much by some noisy fool you just want to BLAST THEM OUT!

Now this lady is in the music biz, so lots of her music nut friends, including me, began suggesting loud and obnoxious songs The thread took on a life of its own.

So I decided to put a list together including some suggestions from the thread. And thus my latest Spotify list: Music to Drive Your Neighbors Nuts.

Metal Machine Music was one of the first suggestions there. Someone else suggested some Tuvan throat singing (I chose something by Huun-huur-Tu).

Another contributor offered Shooby Taylor's weird version of "Stout-Hearted Men," I know that one from Irwin Chusid's Songs in the Key of Z Vol. 2. I couldn't resist adding another classic from that album, "Cousin Mosquito" by Liberian Congresswoman Malinda Jackson Parker.

Added some Skinny Puppy, Butthole Surfers, Zappa, Residents, a song with T. Valentine being T. Valentine, some Smile-era weirdness from The Beach Boys, a sinister little Charlie Manson tune and some supreme tackiness from David Hasselhoff that will make you want to commit unspeakable crimes.

You can use this to harass your neighbors, force ousted dictators out of their sanctuaries, torture prisoners ... lots of possibilities. Hey and since it's Spotify, chances are a couple of those obnoxious ads they run will pop up. These will fit right in.

For the record, I like my neighbors. I hope I didn't play this too loud when compiling this list.
Have fun ...