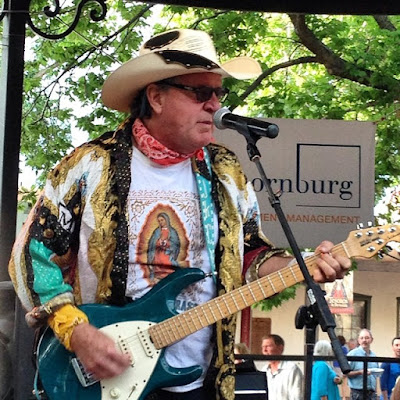 In case you don't know much about Carrasco, a wise old rock 'n' roll writer once said:

Carrasco and the band seemed to come out of nowhere right about the time New Wave was starting to fade. Elvis Costello had repopularized the Farfisa/Vox organ sound a few years before (on his album This Year’s Model), but Carrasco, keyboardist Chris Cummings, and the others took it further, creating spirited music that sounded like a joyful blend of The B-52s and Question Mark & The Mysterians.

Carrasco was just a gringo loco (born Joseph Teutsch in Dumas, Texas), but his love for Tex-Mex music and Chicano rock in general propelled his Nuevo Wavo sound.

Carrasco and The Crowns seemed to be everywhere for a brief moment. They played “Don’t Bug Me Baby” on Saturday Night Live. Later, “Party Weekend” became a staple on MTV. Carrasco was interviewed in Rolling Stone. After a chance meeting at a recording studio, he did a duet with (pre-Thriller) Michael Jackson.

And for a few years it seemed he was at Club West in Santa Fe at least every few months. He was the one of the first national acts, if not the very first, to play there, treating local folks to his crazed, high-energy, hopped-up, crowd-surfing, wall-crawling antics in a stage show that was part James Brown, part Sam the Sham, and part Spider-Man.

Truth is, Carrasco and The Crowns became more of a regional phenomenon. Here in the Southwest, we still loved them long after the trendies and the mainstream forgot about them.

IU've seen Carrasco the last couple of times he played Plaza Bandstand. And while he's gotten a little too old for some his his '80s acrobatics, he still gives a powerful performance.

He'll be playing with a band called Los Side FX. I haven't heard them, but if they're with Joe, they're bound to be good.

Santa Fe's own Alex Maryol opens the show. According to the AMP Concerts website, the doors open at 6 pm (which is weird, because there are no doors at Railyard Plaza) and the show starts at 7.

I'll be there. Will you?

Here's a video from his 2012 Bandstand show