A version of this was published in The Santa Fe New Mexican
July 10, 2015

It’s the war that never seems to end.

Last month’s killing of nine people at Emanuel African Methodist Episcopal Church in Charleston reopened a lot of old wounds; the young man who police say has confessed to the crime reportedly had the deluded hope of starting a race war. Dylann Roof didn’t accomplish that.

But what he did spark was another intense national debate about the Confederate flag, the nature of the Confederacy itself, and the meaning of the American Civil War.

And what do you know? The scars still are too tender to declare this debate done.

This week South Carolina's legislature voted to remove the Confederate flag from the Capital grounds and Gov. Nikki Haley signed the bill. Somehow, I don't think this war is over.

The battle over Confederate culture has been fought in the world of music as well — and I’m not just whistling “Dixie.” Here is a look at a handful of the musical shots fired in the past 50-some years. 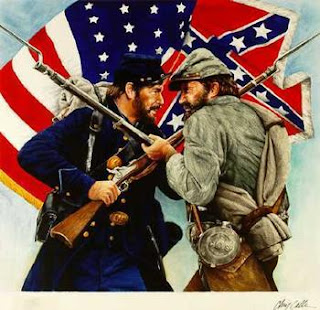 * “The Burning of Atlanta” by Claude King. This 1962 single was the follow-up to Claude King’s biggest hit, the country classic “Wolverton Mountain.” In many ways, the song — which concerns Gen. William Sherman’s torching of the Georgia city in Nov. 1864 — fits in the “faux folk song” phenomenon of that era, songs like Johnny Horton’s “The Battle of New Orleans,” “El Paso” by Marty Robbins, and Bobby Bare’s “Miller’s Cave.” But “Atlanta” has an edge to it, especially considering what was going on with the civil rights movement in the South in 1962. King singing, “We don’t care what the Yankees say, the South’s gonna rise again,” was more than a little charged in this context.

* “Down in Mississippi” by J.B.  Lenoir. For some reason, bluesman J.B. Lenoir’s swampy tune, recorded in Chicago in 1966, didn’t get a fraction of the airplay that “The Burning of Atlanta” received. Lenoir definitely wasn’t fantasizing about the South rising again. As far as he was concerned, things hadn’t really changed that much from the old days. Lenoir had been writing topical blues and protest songs since the ’50s. “Mississippi” is his finest. “They had a huntin’ season on a rabbit/If you shoot him you went to jail/The season was always open on me/Nobody needed no bail.”

* “An American Trilogy” by Mickey Newbury. Elvis Presley turned this haunting medley into a showstopper for his live performances in the mid-’70s. But it was renegade Nashville songwriter Mickey Newbury who put the three songs — “Dixie,” “Battle Hymn of the Republic,” and “All My Trials” together. It is a sweet plea for reconciliation. Hat tip to the online publication Saving Country Music for recently re-publishing Chris Campion’s liner notes to Newbury’s An American Trilogy compilation album, which focuses on Newbury’s performance of “Trilogy” at a Hollywood nightclub in 1970. Campion describes “All My Trials” as “a Bahamian lullaby turned plantation spiritual.” He continues, “It fit so well, forming a breach and symbolizing a quiet revolution to the other two songs, charged as they were by their association with Civil War conflict.” Campion says that Newbury’s wife was concerned that the Confederate anthem “Dixie” would offend Odetta, the iconic African-American folksinger who was in the audience that night. But from the stage, Newbury himself “could see Odetta’s eyes glisten as they welled up, her face shine as the emotion stained her cheek.”

* “If the South Woulda Won” by Hank Williams Jr. Had the South won the Civil War, Hank Williams Jr. suggests in this 1988 ditty, it would be so cool. We’d celebrate Kentucky bourbon, Cajun cooking, Elvis, Patsy, and his dad. The Supreme Court would be in Texas where they’d execute criminals quicker to avoid all those boring appeals and embarrassing exonerations. The girls all would have sexy Southern accents. All this, plus slaves!

* “Ronnie & Neil” by Drive-By Truckers. The Truckers’ 2001 album Southern Rock Opera is a concept album about what frontman Patterson Hood calls “the duality of the South.” This song is the strongest. It starts off talking about the 1963 Birmingham church bombing. (“Four little black girls killed for no goddamn good reason,” Hood sings.) Then it gets into the rhetorical back and forth between Lynyrd Skynyrd singer Ronnie Van Zant and Neil Young, who had written a couple of disparaging songs about the South (“Southern Man” and “Alabama”). Van Zant in “Sweet Home Alabama,” responded, singing, “I hope Neil Young will remember Southern man don’t need him around anyhow.” But Hood points out that in real life Ronnie and Neil became pals, a symbol of reconciliation.

* “Wave That Flag” by The Bottle Rockets. This song, from the 1993 debut album of the influential alt-country band from Festus, Missouri, deals directly with the stars and bars. “Wave that flag, hoss, wave it high/Do you know what it means? Do you know why?/Maybe being a Rebel ain’t no big deal/But if somebody owned your ass, how would you feel?” 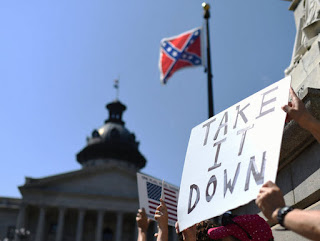 * “Take it Down” by John Hiatt. This stark and mournful song from John Hiatt’s Crossing Muddy Waters album from 2000, starts out talking about lost love and ends up commenting on the issue of the Confederate flag flying over the South Carolina capitol. The message is that people should realize when they’ve been defeated — be it a romance or a civil war — and stop clinging to symbols of the past.

* “The Lost Cause” by The Legendary Shack Shakers. Over the strains of what sounds like a player piano, in this 2010 tune, J.D. Wilkes describes a battalion of undead Confederate soldiers. It’s not really a ghost story; it’s a refutation of historical revisionism that glorifies the Confederacy: “A company of skeletons in rags/March home under tattered white flags/Dusty Bibles and deep empty pockets/Dark dreams and deeper eye sockets/We ain’t right in the head and our women lay dead/We’re the losers who chose the Lost Cause.” The final verse seems even more ominous after Charleston: “From the dirt where they plant us,/‘Sic semper tyrannis!’/ May we one day avenge our lost cause."

You can hear most of these songs on this playlist, plus a few bonus tracks:

And here are the others: