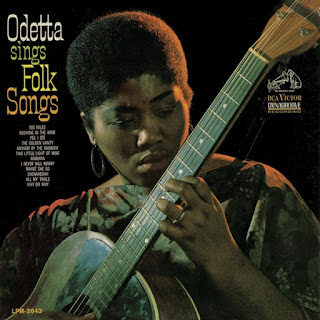 Consider this Throwback Thursday post a prelude to this week's Terrell's Tune-up column. I can't say why right now, but a certain song I mention in the column has an obvious connection with "All My Trails," a tune I first learned at various United Methodist Youth Fellowship gatherings during my high school days in the late '60s and early '70s.

I've always had a special place in my heart for the song. And lots of great -- and some not-so-great -- singers have recorded and performed versions of it. Most the usual folkie suspects -- Seeger, Baez, Van Ronk, The Kingston Trio, Peter, Paul & Mary -- have done it. The Bible-soaked lyrics tie in nicely with the Civil Rights struggle of the early '60s. "If religion were a thing that money could buy / The rich would live and the poor would die ..." and "I had a little book was given to me / And every page spelled liberty .."  etc.

The lyrics get changed around from version to version. Some even cut out the first verse "Hush little baby don't you cry/ You know your mama was born to die ..."  which is pretty morbid for a goddamn lullaby!

Yes, a lullaby. Practically every source I looked at while researching the song said it came from or might have come from an old "Bahamian lullaby" or perhaps a Bahamian "spiritual." One dubious source even referred to it as a "Jamaican slave song."

But when I set out trying to find out where the darn thing came from, I kept running into a brick wall. I couldn't find anything definite. No accounts of Nassau sailors singing it to delighted British journalists. Not even any Youtubes with Bahamian singers. (And I seriously wanted to find a crazed, incomprehensible version by Joseph Spence to post here!) Seems like Alan Lomax or somebody should have stumble across some mama in the Bahamas trying to put her kid to sleep with something like this.

It turns out that another blogger (and fellow podcaster and fellow musician and fellow DJ) who wanted to explore "All My Trials" ran into the same problems. Jim Moran of Comparative Video 101 wrote:

It turned out that "All My Trials" is of extremely uncertain pedigree, and the chances seem very good that the "folk" song was in fact assembled from fragments of earlier spirituals to sound like a traditional song when it was set to a mysterious Bahamian lullaby that no one really seems ever to have heard or bothered to record.

If Moran is right -- and I suspect he is --  then I've got an inaccuracy in tomorrow's Tune-up!

So where did it first appear? According to Moran, "The earliest commercial recording anyone can find seems to be Bob Gibson in 1957 -- on an album of what he thought were `strange' folk songs."

Here are some of my favorite versions, starting with Odetta (who also figures into tomorrow's column)

The first non-United Methodist Youth Fellowship version of "All My Trials" I ever heard was Harry Belafonte's. My mom had an album that contained it.

Over on the country side of the tracks, Anita Carter (June's sister, Maybelle's daughter, Hank Williams' singing partner) did this lovely take.

And, thanks to a blog by a Portland soul DJ called DJ Action Slacks, I just discovered this 1967 version by a classic girl group called The Cookies, bettter known for their early '60s hits "Chains" and "Don't Say Nothin' Bad About My Baby." In the middle of the song they sing a verse of "Kumbaya" another song I learned from my Methodist youth group.

Early on in the history of "All My Trials," there was a spin-off version. The Kingston Trio used the same basic melody -- apparently that good old Bahamian lullaby -- but overhauled the lyrics to create "All My Sorrows," a song full of heartache but at least no dying mamas. This song was recorded by The Chordettes, The Shadows and, best of all, The Searchers,

And don't forget that Nashville songwriter Mickey Newbury merged "All My Trials" with "Dixie" and "Battle Hymn of the Republic" to create "American Trilogy," best known through Elvis Presley's version.

But we'll talk more of that tomorrow.