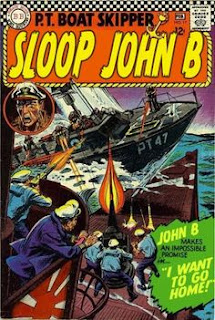 Reviewing the movie Love and Mercy last week sent me on Beach Boys kick. One of my favorite songs of theirs for decades has been "Sloop John B," the tale of a miserable sea voyage that started in the Bahamas.

Released first as a single in March 1966, then included a few months later on Pet Sounds, the John B story told goes way beyond cruising to the hamburger stand in your daddy's car:

The first mate he got drunk
And broke in the Cap'n's trunk
The constable had to come and take him away
Sheriff John Stone
Why don't you leave me alone, yeah yeah
Well I feel so broke up I wanna go home

No, Brian Wilson didn't write this song. It was brought to him by Al Jardine, the Beach Boys' resident folkie, Jardine had picked it up from a version, titled "Wreck of the John B," by The Kingston trio.

The Trio was not the only folk group that did this song. Cisco Houston recorded a version, as did The Weavers in the '50s.  Country singer Johnny Cash, who also moved around folk music circles, included it under the title "I Wanna Go Home" on his 1959 album Songs From Our Soil.

But the song goes back much further. It came from the Bahamas. It was transcribed by British author Richard Le Gallienne in a 1916 issue of Harper's Monthly in an travel piece called “Coral Islands and Mangrove-Trees” We should thank Le Gallienne for introducing the song -- under the title "The John B. Sails" --  to mainstream culture. And we should try not to puke at his condescending, racist tone:

These negro songs of Nassau, though crude as to words, have a very haunting, barbaric melody, said to come straight from the African jungle, full of hypnotizing repetitions and absurd choruses,  which, though they may not attract you much at first, end by getting into your blood, so that you often find yourself humming them unawares.

Poet Carl Sandburg collected it a decade later in his 1927 book of folk songs  American Songbag.

Roger McGuinn of The Byrds, who recorded his own version a few years ago, did a little research on the song. (Click that link. McGuinn has a nice, free MP3 for you.) On his website, he quotes Sandburg:

'John T. McCutcheon, cartoonist and kindly philosopher, and his wife Eveleyn Shaw McCutcheon, mother and poet, learned to sing this song on their Treasure Island in the West Indies. They tell of it, 'Time and usage have given this song almost the dignity of a national anthem around Nassau. The weathered ribs of the historic craft lie embedded in the sand at Governor's Harbour, when an expedition, especially set up for the purpose in 1926, extracted a knee of horseflesh and a ring-bolt. These relics are now preserved and built into the Watch Tower, designed by Mr. Howard Shaw and built on our southern coast a couple of points east by north of the star Canopus.'

Nassau singer Blake Alphonso Higgs, who went by the name "Blind Blake" (but was not the American bluesman!) did a calypso version in the early 50s. Another Bahamian, guitar picker Joseph Spence recorded it in his own peculiar way, on his 1972 Arhoolie album Good Morning Mr. Walker.

Van Morrison teamed up with skiffle king Lonnie Donegan at the turn of the century to do this mighty keen rendition. Donegan had recorded a lush version of it in 1960 under the title "I Wanna Go Home." I especially like his verse about the captain being a "wicked man.'

With all the drinking, fighting and other mayhem in this songs it's a wonder that there aren't more punk rock versions. But this Italian band, Devasted, had the right idea