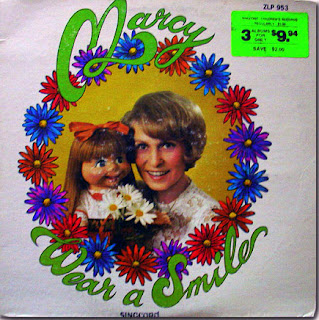 Her songs and stories were upbeat, joyful, positive, full of devout Christian love -- heavy on the Golden Rule, light on the Hellfire -- good-spirited entertainment for children.
But something about Little Marcy just gave me the willies.

For one thing, she wasn't even a real little girl. She was some kind of ventriloquist dummy -- devil doll, they used to call them -- operated by a frustrated gospel trombonist .

The puppet meister was one Marcellaise Tigner, a native of Wichita, Kansas who released more than 40 Little Marcy albums between 1964 and 1982.

I'll yield to the scholars at Weirdomusic.com to tell this tale: 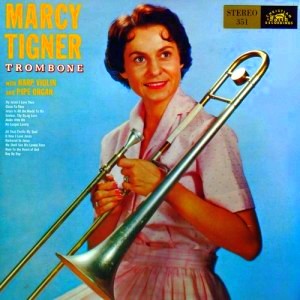 After Tigner's husband, Everett, overheard a group of record company executives discussing plans to hire child singers to make a children's album, she and Whitney entered the studio to record her rendition of the standard "Jesus Loves Me" as a showcase for her own childlike voice. The demo landed Tigner a deal with Cornerstone Records, and in 1964 she released her first children's effort, Happy Day Express: Sing With Marcy. A series of albums and live performances followed, but Tigner felt uncomfortable appearing on-stage while singing in a child's voice. While appearing in the film Teenage Diary, she befriended co-star (and Miss America 1965) Vonda Van Dyke, herself an accomplished ventriloquist; at Van Dyke's urging, Tigner purchased a copy of Paul Winchell's book Ventriloquism for Fun and Profit and began learning the trade. The same doll maker who designed Edgar Bergen's Charlie McCarthy character was soon commissioned to create Little Marcy, who became the on-stage conduit for Tigner's vocal performances.

But her evil spawn, Little Marcy lives on. In your nightmares. (So far I've found no hard evidence to verify the rumor that she's shacking up with this guy.)

I think Nirvana did this first one.

There's a little bit of Little Marcy in Ned Flanders. (And if The devil doesn't like it, he can sit on a tack ...) 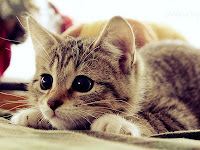 This short documentary exposes the truth about Little Marcy. Watch it before the Powers That Be yank it off the Internet