A version of this was published in The Santa Fe New Mexican
August 14, 2015 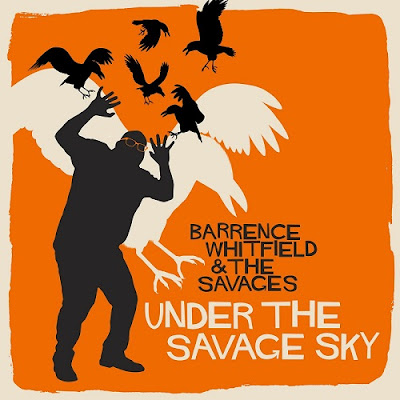 A few years ago, when rock ’n’ soul shouter Barrence Whitfield first reunited with guitarist Peter Greenberg and bassman Phil Lenker — all original members of The Savages, who tore up the East Coast back in the mid-1980s — my biggest concern was that their excellent comeback album, Savage Kings, might be a one-shot deal.

But since then, Whitfield and his Savages have faithfully released an album every two years, Dig Thy Savage Soul (2013) and now Under a Savage Sky (official release date Aug. 21).

Once again, Whitfield and crew have laid down a record full of high-charged, hopped-up, rough, rowdy and raw tunes that should make you remember why you loved rock ’n’ roll in the first place.

There’s no mistaking this album for anything but a Barrence Whitfield record. It’s got your basic rocking guitar, screaming sax, and soulful shouts from Whitfield. There are musical nods to Little Richard, The Sonics (the immortal Washington state garage giants, with whom Barrence & The Savages toured earlier this year) and soulsters like Don Covay and Otis Redding.

But while the album retains all those elements that Whitfield fans expect, Under the Savage Sky has a harder edge — faster rhythms, louder drums, crunchier guitar — than the group’s previous efforts. As a band, The Savages are still extremely tight. Here they just seem more ferocious.

The core of the album consists of tunes written by Greenberg and fellow New Mexico resident Michael Mooney. (The two played together in a Taos garage band called Manby’s Head, which I haven’t seen in a couple of years.)

Among these are “Angry Hands,” which has a melody similar to Alice Cooper’s “I’m Eighteen” and — like “Willie Meehan” on Savage Kings — is about a washed-up boxer; “Incarceration Casserole,” which is about a guy whose wife is locked up in jail — causing him to obsess over who’s going to fix his dinner; and “Adjunct Street,” a slow, minor-key blues that Whitfield sings the hell out of.

Then there’s “Katy Didn’t,” written by Greenberg, Mooney, and Whitfield himself. Starting off with a guitar hook that reminds me of “Kicks” by Paul Revere & The Raiders, the song begins, “She had a hollow leg/Knew how to make me beg/She drank me under the table.”

As usual, Whitfield includes some inspired covers from deep in the bowels of Greenberg’s fabled record collection. “I’m a Full Grown Man,” which was originally called “I’m a Man” when soulman Timmy Willis recorded it decades ago, has sweet echoes of the Stax/Volt sound; “The Wolf Pack” goes all the way back to Kid Thomas (Louis Thomas Watts), who recorded it in 1955; and “I’m a Good Man,” an Eddie Snow song from the ’50s, which sounds like a rewrite of “Shake, Rattle and Roll.”

Under the Savage Sky ends with “Full Moon in the Daylight Sky,” an intense minor-key workout written by Whitfield and Lenker. It is scheduled for release on Aug. 21 but is ready for pre-order on all your favorite online shops. 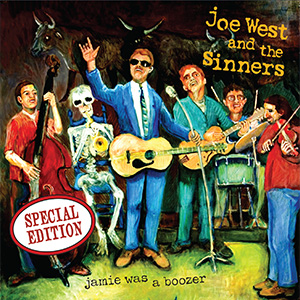 * Jamie Was a Boozer: Special Edition by Joe West & The Sinners. Back in 1998, Joe West was living in Austin. I hadn’t met the guy at the time, but I was starting to get familiar with his music. He’d sent me his first album, Trip to Roswell, N.M., which had some good songs on it. But I didn’t officially become a West fan until he sent me his second album, Jamie Was a Boozer.

Backed by a snappy little saloon band called The Sinners (and on some cuts, former True Believer Jon Dee Graham on lap steel), Jamie Was a Boozer was no sophomore slump. The album has been out of print for years, but last month a company called Baby Black Panda released a new version, featuring all 15 of the original songs, plus three previously unreleased live tunes.

I looked up my old review of the original version, which was in a column about several local releases. Enjoy some recycling:

OK, officially Joe lives and works in Austin but his Santa Fe ties are legit. His dad, artist Jerry West lives here. And Joe frequently pays tribute to Santa Fe in song, such as “$2000 Navajo Rug,” a sarcastic toast (with an authentic Santa Fe $5 cerveza) to the ricos who keep our cost of living so high.


Joe has a knack for writing funny tunes — Jim Terr would have killed to have written “Trailer Park Liberal” — but the main strength of this album is a core of songs, some funny, some not, related to alcohol and the abuse thereof.

The title song is an unflinching tribute to a friend who drowned in liquor. “The Ballad of Terri McGovern,” about a woman who got drunk and froze to death, is even more startling. “Rehab Girl,” about a guy with a crush on a lady who works at a rehab center, is lighter but it’s got an edge.

I’ll stand by what I wrote, adding that the songs have passed the proverbial test of time.

Well, maybe some of those Santa Fe places that sold “$5 cervezas” are no longer so cheap. Otherwise it doesn’t sound dated at all. And the live bonus tunes, while not on the same level as “Rehab Girl,” fit in well.

So even if you haven’t heard the original album — and in fact, if you’ve never heard Joe West, my advice is to dive in.


And here's the title song of Jamie was a Boozer.