Yesterday for Wacky Wednesday, I featured songs about Watergate in a slightly belated celebration of the anniversary of Nixon's resignation. One of those songs was Tom T. Hall's "Watergate Blues," which I noted has a melody lifted from an old folk song called "White House Blues," which was about the assassination of President William McKinley in 1901,

So why the heck not, for this Throwback Thursday, let's have some variations of that song by some of the cooler artists who have performed it .. plus a couple of tunes about the other more obscure presidential assassination.

McKinley was shot while on vacation in Buffalo, N.Y. by a self-described anarchist named Leon Czolgosz.

According to the Old Weird America blog, which examines songs from Harry Smith's Anthology of AmericanFolk Music:

It seems that the ballad originated with Afro-American “songsters” and, like “Stackalee”, was a kind of proto-Blues with a melody and a verse structure very alike another murder Blues ballad, “Delia’s gone” ... in his book Long Steel Rail, Norm Cohen tells about the writer D.H Lawrence, who used to sing a version of “White House Blues.” A friend of Lawrence recalled that in 1915, as he was singing several Negro Spirituals, he also “…set our brains jingling with an American ballad on the murder of president McKinley with words of brutal jocularity sung to an air of of lilting sweetness …

Brutal jocularity will do it every time.

One of, if not the earliest recorded versions of the song was by North Carolina singer/banjo man Charlie Poole. He did it like this:


Bill Monroe brought "White House Blues" to the world of bluegrass. He did a wondrous version, but this more recent version by Del McCoury may be my favorite.

Did I mention another assassination? President James Garfield was shot and fatally wounded in June 1882. His murder at the hands of Charles Guiteau -- who felt The president owed him some patronage job.

YouTube has one of the songs, "Mr. Garfield," which Lunsford says he first heard in 1903. It's an eight minute murder ballad odyssey. 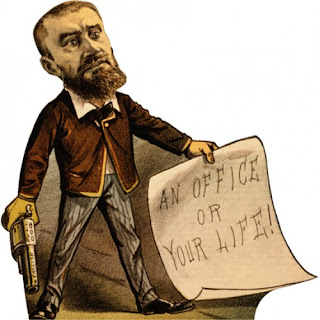 The second Garfield song also appears on Harry Smith's magical Anthology, recorded in 1927 by Kelly Harrell & The Virginia String Band  "Charles Guiteau" is from the jailed assassin's perspective as he awaits his date with the hangman.

According to Bob Waltz in an article in Inside Bluegrass , this song is a "touch-up" song.

... the unknown author simply took the earlier ballad "James A. Rogers" (executed in New York in 1858) and "zipped in" the details of the Garfield case. This is no surprise; the same tune carried at least two other murder/confession ballads, "John T. Williams" and "Ewing Brooks."