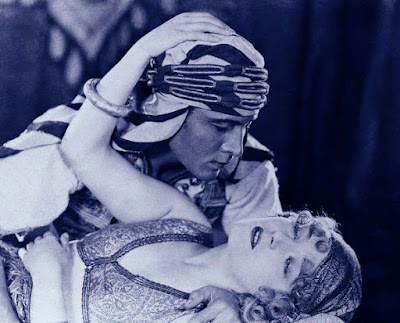 Next Sunday, Aug. 23, marks the 89th anniversary of the death of Rudolph Valentino, perhaps the most popular silent film star the world has ever known.

To be honest, I'm not a huge fan of silent films. But today I'm going to honor Valentino not for his own achievements but for inspiring a wonderfully wacky American song: "The Sheik of Araby."

Trying to cash in on the wild popularity of Valentino's 1921 feature film The Sheik, Tin Pan Alley songwriters Harry B. Smith and Francis Wheeler wrote the lyrics to music by Ted Snyder. Snyder had written the melody of a similar tune called "That Night in Araby,"

But it was "The Sheik of Araby" that folks remember. It was one of those songs that made the '20s roar, that made the flappers flap. Even F. Scott Fitzgerald included some lyrics from the song in The Great Gatsby.

The Club Royal Orchestra, directed by Clyde Doerr, may have been the first to record it in 1921. But I prefer this version by a group called The California Ramblers recorded the same year. Like Doerr's it's an instrumental. But it's a little peppier (and the sound quality of the YouTube is better.)

Fast forward to 1936 and The Sheik's still shakin' Don Albert & His Orchestra has the distinction of being the first band to add the line "with no pants on" after every line in the verse.

Spike Jones kept his pants on, but he did a wild version with a nice 'n' crazy video ... I mean "soundie."

Louis Prima & Keely Smith did a wonderful medley of "Sheik of Araby" and "When You're Smilin'. They also keep their pants on in the "Sheik" section, instead singing "With no turban on."

The Fats Domino and Beatles videos I originally embedded has been removed from YouTube, but now they're at the top of my Spotify list below, where you'll find more Sheiks than you can shake a stick at.