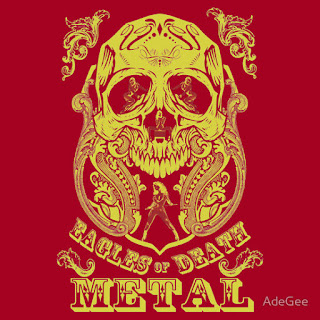 To divert somewhat from the normal lighthearted tone of this blog, I feel I have to post this interview in Vice with The Eagles of Death Metal, whose recent Paris concert ended in carnage.

Maniacal religious fanatics from ISIS (ir ISIL? Or Daesh or whatever you want to call these evil creeps) shot and killed dozens of people at the band's Nov. 13 show at the Batclan concert hall. (I've seen the death count at 89 and 90. Not sure which if either are accurate. The toal number of victims of the Paris attacks is about 130 people.)

It's hard to listen to but the video of the interview is below.


The Eagles of Death Metal will donate all publishing royalties of this song to a fund for the Par8is victims and are encouraging other musicians to record it.