A version of this was published in The Santa Fe New Mexican
November 12, 2015

Recent events in the news — along with some new albums from around the world I’ve been listening to lately — got me thinking about a certain punk-rock band I discovered online earlier this year. It’s called Mazhott, and starting about 2007, the group rocked the casbah from Damascus, Syria. Yes, that Syria.

In a 2009 interview in Taqwacore Journal, the band’s guitarist Rashwan said, “We sing about stuff that matters to young people, in general, and social [issues]. [For example], the high school diploma, here, is unbelievably difficult, so, we wrote about that. We wrote about fathers forcing their young daughters to marry older men, about our generation that is frustrated and lost and don’t know [what] to do with their lives, about less separating of boys and girls, and about how we need more attention and freedom.”

Of course, I couldn’t understand any of the lyrics because they’re in Arabic. But the music rocks, so I bought the digital version of Mazhott’s EP from its Bandcamp page. With my modest payment, I wrote a note wishing the musicians well and hoping they were all safe from the troubles over there.

I got a nice email back from Rashwan, who said, “All of us at Mazhott are safe and sound, but unfortunately each in a different country.” I guess that would make them refugees, but if I’m not reading too much into it, “safe and sound” implies some level of stability.

And I just heard from Rashwan last week for the first time in months. He sent me an MP3 of a new Mazhott song — their first recording in years. I'll play that on Terrell's Sound World, on KSFR-101.1 FM and www.ksfr.org, at 10 p.m. Sunday, Nov. 29.

Did I say something about some music from around the world?

Damn the fear-mongering! Let these new albums cross your borders and immigrate into your ears! 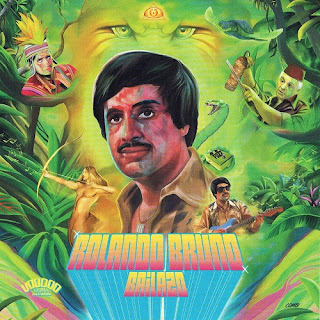 * Bailazo by Rolando Bruno. Once upon a time, there was a Peruvian garage-punk band called Los Peyotes. (I’ve reviewed their work in this column and played their songs on my radio shows and podcast.)

Guitarist Bruno, who I believe is Argentine, was a member of this hopped-up, snot-rock combo. Now he’s been reborn as a cumbia king. Or as his new record company Voodoo Rhythm describes his new sound, “Full Blast Psychedelic Latino Cumbia Garage with a very Cheesy Touch of a ’70s Supermarket!!!”

His cumbia obsession started out as a side project while Los Peyotes was still happening. He’d upload old cumbia songs onto his computer and mutate them into rocking Latin dance numbers filtered through his own punk-rock perspective. For Bailazo, he composed original songs and hired actual musicians to create this crazy sound.

Bruno brings an international perspective to his already wild musical vision. He throws in Middle-Eastern sounds on “Falafel King.” (Is that an oud, dude?) And there’s also what sounds like a bagpipe. This tune would make the British world music band 3 Mustaphas 3 jealous.

And he’s turning Siamese on “Thai Cumbia,” which could almost be a kung fu movie soundtrack waiting to happen. This track starts off and ends relatively slow. But the sped-up middle section sounds like some frenzied Carlos Santana guitar attack.

* Supay by Cankisou. This band from the Czech Republic never ceases to amaze me. It’s a seven-piece group that mixes musical influences from who knows how many cultures into a unique blend of rock ’n’ roll.

You’ll hear strands of Middle-Eastern music; rhythmic Afro-beat sounding sounds; jazz excursions and sonic allusions to Balkan music; and a touch of metal here and there. (And Breaking Bad fans’ ears will perk up at the opening notes of the song “Korobori,” which sounds just like the soundtrack to that late, great show’s opening sequence. “Korobori” turns into what sounds like a salute to the band Morphine — except there’s a brief bluegrass section in there, too.)

I can’t write about Cankisou without quoting from its own origin myth on its website:

“Cankisou music is based on an old legend about one-legged Canki people, and the band also learnt their language, which is understandable all over the world.”

For a one-legged people, these guys sure kick butt. If you like Gogol Bordello or 3 Mustaphas 3 (them again!) or, to get a little more obscure, Polish rocker Kazik Staszewski and his band Kult, do yourself a favor and listen to some Cankisou.

* Live in Paris, Oukis N’Asuf by Tinariwen. This live album is the latest by this musical collective made up of nomadic Tuareg tribesmen from northwestern Africa. They have played New Mexico several times in recent years.

Many of the original members of the band were living in Libya when they were forced into military service by the late and not-so-great dictator Col. Muammar al-Qaddafi. Some of Tinariwen also fought as Tuareg rebels against the government of Mali.

So truly, this music is what Joe Strummer would have called “rebel rock.” Actually it’s trancy guitar music with powerful Saharan percussion provided by a conga-like instrument called a darbuka. And no, I don’t understand the lyrics, sung in a Berber language, Tamasheq. But I understand the words have gotten the group banned on the radio in Mali and Algeria, so they must be subversive.

Even cooler, Tinariwen leader Ibrahim Ag Alhabib has said in interviews that some of his earliest influences were the singing cowboys of American Westerns. I don’t hear any Gene Autry in this album, but I’ll keep listening.

Songs from all the acts I discussed here can be found on the latest Big Enchilada podcast.

Here is Mazhott's last live show in Damascus back in 2010

And here is Tinariwen live in Paris with Lalla Badi.