It was 49 years ago this week when the world lost a gentle Goliath of American music, Mississippi John Hurt.

Born in the 1890s to a sharecropping family in Carroll County, Miss., Hurt taught himself to play guitar. Though agriculture was the way he earned his living, he sometimes played at parties in and around his Avalon, Miss. home. Hurt recorded 12 songs for Okeh Records. They didn't sell well. Okeh went broke during the Depression Hurt went back to farming.

But in 1952, two of his songs -- "Frankie" and "Spike Driver Blues" -- appeared on Harry Smith's Anthology of American Folk Music, exposing Hurt to a wider, whiter audience

And then came the wild rush of the early '60s folk boom, when roving armies of young record collectors combed the rural South searching for authentic old blues and hillbilly recording artists of yore. Hurt living near his hometown of Avalon, Miss. was found by musicologist Tom Hoskins.

Soon Mississippi John was the star of folk festivals and the big city coffee-house circuit, appearing on the same bills as "re-discovered' bluesmen like Son House and Skip James. His self-taught, syncopated finger-picking style was studied, copied and celebrated by a new generation of guitarists.

I didn't discover John Hurt until about three years after he died. In 1970, when I was a senior in high school, I decided I needed to start listening to some actual blues music. 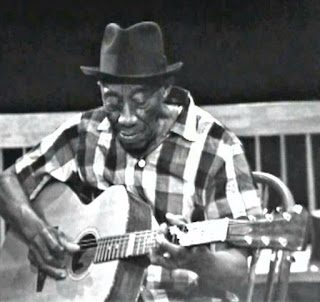 For years I was familiar with names like John Lee Hooker, Muddy Waters and B.B. King by way of blues-soaked rock bands like The animals, The Rolling Stones and, later Canned Heat and Cream. And several years before I'd seen Howlin' Wolf play on Shindig with the Stones at his feet. But I didn't have any actual blues records in my collection. So that Christmas I asked my mom to get me a blues album -- any blues album.

Mom was fairly hip for someone of her era. She gave me my first Bob Dylan album, Bringing it All Back Home, before I'd even heard of the guy. But she was not a blues scholar. So to make sure I got a decent blues record for Christmas, she went downtown to The Candyman (which she didn't realize was named for a Mississippi John Hurt song!) and asked a clerk for a suggestion.

Whoever it was sold her a Hurt album (that later was reissued on CD under the title of Legend) that had a bunch of his greatest tunes including "Pay Day," "Louis Collins," "Trouble I Had All My Days," "Stack-O-Lee Blue" and a wistful little song of despair called "Let The Mermaids Flirt With Me."

No, it wasn't exactly the blues. Mississippi John's music was influenced by blues, gospel, ragtime, white hillbilly records and all sorts of sounds that drifted into rural Mississippi. While it wasn't exactly what I asked for, the album and the man playing album became favorites for life.

To commemorate his death (Nov. 2, 1967) and to celebrate his life, here are a couple of videos of Mississippi John Hurt singing on Pete Seeger's TV show Rainbow Quest, which originally aired on a New York UHF station.

Here's "You Got to Walk that Lonesome Valley:

And here's the song that remains my favorite to this day.

This following song is a tribute to Hurt written by Tom Paxton and recently revived by Jack White. But my favorite is the version by Dave Van Ronk, which I first heard when I saw him in Santa Fe in 1980.

And just in case you never heard him sing that "Candyman" ...