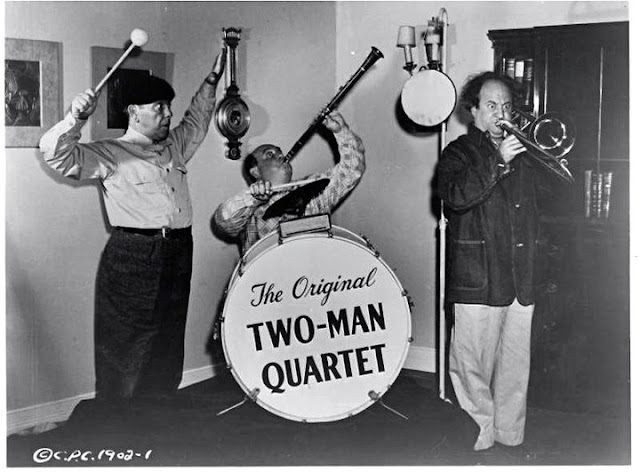 Notice what not is on that list is "sing songs."

Yet every now and then an American will decide to stretch out and make some sort of pop record. And sometimes these tunes even make the charts. Most the time these are novelty records, extensions of a funny man's comic personna.

Here is a glance at that strange entertainment phenomenon. 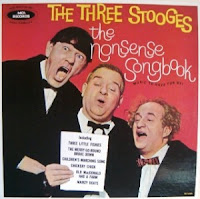 Let's start with The Three Stooges. By the late 1950s, Curly Howard was dead, as was another Howard brother Schempp. Moe and Larry tried a third stooge named Joe Besser for a couple of years, but he didn't work out. Then they hooked up with a guy named Joe DeRita who bore a resemblance to Curly Howard. DeRita became known as "Curly Joe," and the final stage of the Three Stooges' lengthy career began.

By this point, with an eye on the television market, the Stooges were becoming more "kid friendly." (though as an actual kid, even then I vastly preferred the two-reel shorts from the '30s and '40s.) And in 1959, Moe Larry and Curly Joe went to the recording studio to make a children's album.

One of the songs was called "Swinging the Alphabet." It would appear on several of their 1960s records. But it wasn't a new song. The Stooges had performed it back in 1938 in a two-reeler called Violent is the Word for Curly. This is the version that lives in our hearts:

I'm not sure why Soupy Sales decided to record this dumb parody of teen-dance-craze hits in the mid '60s. The youth of America already loved him for his irreverent kiddie show, Lunch With Soupy Sales. But I have to admit I bought the damn 45 of "Do the Mouse" when I was a kid. I wish I still had it. Here's Soupy on Hullabaloo.

Bill Cosby (I know, I know) tried his hand at music in the mid '60s. He had a hit with "Little Old Man," which was based on Stevie Wonder's "Uptight." And this golden throat released an album called Silver Throat, which mostly consisted of funked up blues and soul standards. His "Mojo Workout" actually was a mutation of Muddy Waters' "I Got My Mojo Workin'." But now when you hear Cos singing, "I got my mojo workin' and I'm going to try it out on you" it sounds pretty ominous, now that we know what we know.


Rodney Dangerfield was born to rap. In 1983 he strung together a bunch of his greatest "No Respect" one-liners, made 'em rhyme and slapped on some early hip-hop beats and "Rappin' Rodney" was born. The video below, which appears to be part of some TV variety show, has cameos by Andy Kaufman and Robert Urich (who I first thought was Pete Rose until a friend set me straight).

Unlike Soupy and Rodney, comedian Eddie Murphy's mid '80s hit "Party All the Time" wasn't a novelty song. It was written by Rick James, bitch! And lately he's been recording reggae with Snoop Doggy Lion or whatever his name is. And it ain't bad. Below is that first Murphy hit.