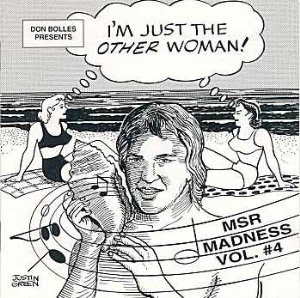 I can't believe I've done an entire year of Wacky Wednesdays and not done a feature on song-poems,

"What is a song-poem?" you may ask. Well, let me quote from myself from a 2001 Terrell's Tune-up where I wrote about a crazy compilation called I'm Just the Other Woman, which I'd just purchased.

You've seen those ads in the back of supermarket tabloids, detective mags, movie rags and girlie books: “Song Poems Wanted. Your poems turned into songs by professional musicians. Send immediately for FREE evaluation ...

Of course, its a scam. It's been going on for years — a century by some reports.

You send in your poem and the company sends you back a glowing evaluation. Your song has true hit potential. Now all you need to do is send in $100 (or whatever the going rate is these days) and your poem will be put to music and recorded in an actual recording studio by some of the nations top session musicians.

They don't mention that these overworked and under-appreciated musicians crank out as many as a dozen songs an hour and sometimes the melody used on your song has been and will be used for others.

Theres always the implication that this recording will be sent around to the top A&R people at major record companies. And of course youll get a few copies of the record to show your friends; in fact some song-poem companies actually have put out compilations.

And wouldn't you know it, this sleazy little corner of the music industry has attracted a subculture of fans who collect and groove on the strangest and most unintentionally funny song-poems they can unearth.

You can learn a lot more about this strange phenomenon at the American Song-Poem Archives, where I first learned about "I'm Just the Other Woman." (Caution though, a lot of those links are dead and it looks like they haven't updated the "news" section in more than 10 years.)

A year or so after I wrote that column there appeared a documentary directed by Jamie Meltzer called Off the Charts: The Song-Poem Story.

Below is one of my favorite tunes from that movie. It was written by a gent named Caglar Juan Singletary.

Another one from the movie is one of the most infamous song-poems out there: "Blind Man's Penis" by John Trubee. Unlike Singletary and most other song-poem poets, Trubee purposely wrote strange and outrageous lyrics as a weird prank. Sung by Ramsey Kearney, the prank became an oughta-be country classic. (I played it on The Santa Fe Opry last week.)

Here is the title song of that song-poem compilation I reviewed in 2001. This is the original versionsung in falsetto by song-poem superstar Rodd Keith. This version, which has obvious mixing mistakes was rejected by lyrics writer Mary Clignett and was remixed with the backwards track gone.

Gene Marshall, who recorded under the name John Muir, delivered this anti-drug message.

This one's a sad story of a decent American cuckolded by an Argentine cowboy.

(From my 2001 column) E. Grange's “Palace Roses" is downright surreal. The music is raw honky tonk with a sweet, weeping steel guitar. Singer Todd Andrews drawls a verse about dancing roses before the speaking part: "I am the father of the palace roses/I sponsor many ceremony dances at my beautiful pink roses palace/the roses palace is attended by all the roses then there is dining after the dancing/and fun is had by all."

Here's another Rodd Keith classic. The lyrics were by a lady named Mildred Shankland.

And here's a loving cover of "Rug Bug" by NRBQ.