THROWBACK THURSDAY: From the Land of Sky Blue Waters 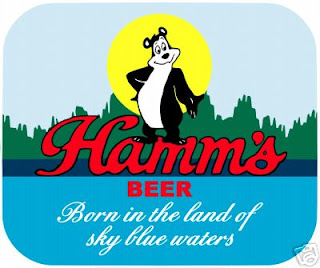 When I was a kid some of my favorite TV commercials were those for Hamm's Beer. I loved the wacky cartoon Hamm's bear and his woodland pals.

This of course was years before I became an actual beer drinker. But maybe there was some kind of insidious subliminal Joe Camel psychology going on here. In my early years of college, I used to buy Hamm's beer to keep around the house. It was cheaper than the more popular beers, so when friends would drop by, they'd go for my roommate's Budweiser, Schlitz or Coors, leaving the Hamm's for me.

The other cool thing I loved about those Hamm's commercials was the music. The song was a pseudo Native American chant, heavy on the tom toms, with lyrics that began:"From the land of sky blue water ..."

Here. Watch one of those ads yourself


But it's only recently that I realized the phrase "From the land of sky blue waters" did not originate with the Minnesota beer company. 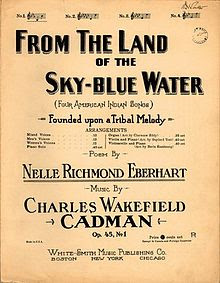 It came from a 1909 composition by Charles Wakefield Cadman with lyrics by Nelle Richmond Eberhart. The melody, Cadman said, was based on a song from the Omaha tribe collected by anthropologist Alice Cunningham Fletcher (1838-1923).

Eberhart's words tell of a white woman captured by Indians. I know, I know, it plays upon some sick Caucasian psycho-sexual fantasies common in that era. But one of the captors doesn't want to rape the lightning-eyed beauty. He's in love with her.

Yes, this would make a hell of a beer commercial.

The song has been performed by some of the great artists of the early 20th Century.

Here is a very early operatic version by Romanian-born soprano Alma Gluck. (No, she wasn't a Jonathan Winters character. She was, in fact, the mother of actor Efrem Zimbalist, Jr.)

And finally, here is Harpo Marx with some fake Indian chief doing a strangely alluring version in the 1940 Marx Brothers movie Go West.