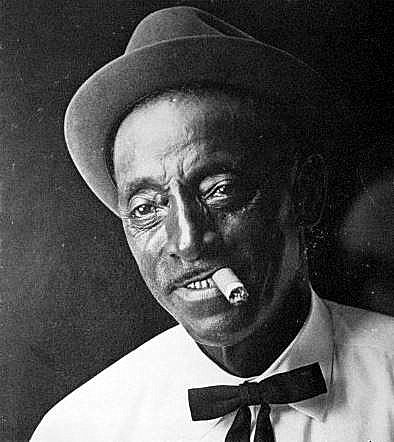 Fred McDowell, know to the blues and folk worlds as "Mississippi" Fred McDowell (though he was born and he died in Tennessee), had a birthday this week. He would have turned 112 on Tuesday, Jan. 12. (Thanks to Putney on the KUNM Blues Show for reminding us of that fact on his show last night.)

On a 1969 album, McDowell declared, "I do not play no rock 'n' roll." That, of course didn't deter The Rolling Stones from recording McDowell's song "You Got to Move."


But McDowell also did not play no delta blues. Living most of his days in Como, Miss., in the northern part of the state (about 50 miles south of Memphis), he was a purveyor of what is known as the Hill Country blues, a sound later associated with R. L. Burnside, Junior Kimbrough and Jessie Mae Hemphill.

I like this description on a site called Hill Country Harmonica: 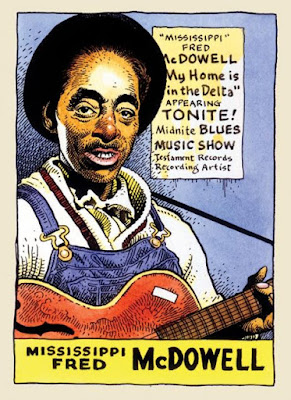 Hill country blues is NOT the stuff that Muddy Waters took to Chicago.  It's the stuff that stayed behind in Mississippi.  This may be why Junior Kimbrough's music sounds sadder, and uses fewer chords, than Muddy's:  because the lives of its creators were more circumscribed.  The hill country elders didn't have the big hits that Muddy, Wolf, Little Walter, B. B. King enjoyed.  They didn't have tour buses.  They didn't play the Regal and the Apollo.  They didn't wear matching suits.  They wore truckers' caps and cowboy boots. They stayed home.  (Actually, an important correction:  R. L. Burnside DID move to Chicago in 1944 and stayed there for about 15 years.  He fled back home to the Mississippi hills after his father, two brothers, and uncle were all murdered in Chicago within the span of one year.  Hill Country bluesmen were the guys for whom the escape-to-the-promised-land thing just didn't work out.)  These men farmed, drove tractors, worked for themselves.

McDowell was old enough to have recorded back in the '20s and early '30s, the era of Robert Johnson, Charley Patton and Son House. But he wasn't. In the '20s, he busked around the streets and Memphis and when he settled down in Como he would play weekend parties and fish fries. But he earned his living as a farmer.


But he didn't record until 1959 when he was "discovered" by Alan Lomax, who released several of his songs on a folk music series on Atlantic Records. A few years later  Chris Strachwitz of Arhoolie Records came calling and recorded more of the singing sharecropper. McDowell became a regular in the folk music revival circuit, playing campuses and coffee houses. he was part of the American Folk Blues Festival tour in Europe, which also featured blues titans like Muddy Waters, Howlin' Wolf, Sonny Boy Williamson, Memphis Slim and others.

In 1969, McDowell recorded an album for Capitol Records, I Do Not Play No Rock 'n' Roll. He played electric guitar and was backed by a pretty rockin' no-rock rhythm section. Some purists hated it. I loved it.

By this time he was attracting the attention of rockers like The Stones and Bonnie Raitt, who recorded a medley of his songs "Write Me a Few of Your Lines" and "Kokomo Me Baby."

McDowell wasn't able to enjoy this recognition for long, however. He died of cancer in Memphis in 1972.

But his music lives on. Here are a few for Fred:

This next one is from the American Folk Blues Festival.

This is a song by the original Sonny Boy Williamson. I first heard it by The Grateful Dead, and later Johnny Winter.

I like Fred's version even better than The Stones' ...